Like the living portraits on the walls of Hogwarts, the current team of Green Wave baseball players has been immortalized in talking baseball cards. "Living" baseball cards featuring the Green Wave roster made their debut online this month. Though short in length  averaging 5 seconds  the Flash-based baseball cards offer a hint at the players' personalities through video. 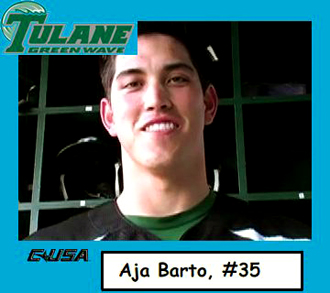 Video baseball cards like this one can be viewed online.

Meet freshman standout Rob Segedin, an infielder and right-handed pitcher with a great swing, and Matt Petiton, who was last week's Conference USA Pitcher of the Week for posting a 0.90 ERA and a .067 opponent batting average.

All the players' cards can be viewed by going to the baseball roster page and clicking on individual player's names.

This will be the first time the Tigers have played on Tulane's campus in more than 10 years. The last time was April 8, 1997.

"All the other 'home' games between then and now took place at either Zephyr Field in Metairie or the Louisiana Superdome," says Richie Weaver, assistant director of athletics media relations.

Tulane and LSU last met this season on March 13 in Baton Rouge. The Green Wave out-hit the Tigers, 10-8, but gave up five runs in the sixth inning, resulting in a 7-5 loss.

The Tulane vs. LSU game starts at 6 p.m. and will be nationally televised on CSTV and broadcast locally on WRBH 88.3 FM radio. Fans also can watch online on the CSTV Gametracker.