Louisiana's legal system is the only one in the nation to be based on the system of civil law that is adopted by most non-Anglophone countries around the world. Since 1808, the Louisiana Civil Code has been the road map by which Louisianans handle private matters from family affairs to business deals, and in celebration of its 200th anniversary, a four-day international colloquium begins tonight (Nov. 19) on the Tulane uptown campus. 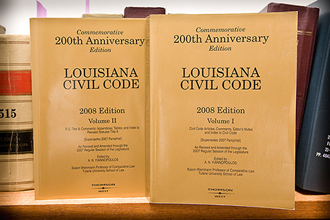 Influenced by the legal systems of France and Spain, the Louisiana Civil Code has undergone several updates and remains at the heart of how Louisianans conduct their lives. (Photo by George Long)

Lecturers from the United States and abroad will participate in the colloquium as the Tulane Law School takes a close look at the Louisiana Civil Code, which is based largely on the civil codes that emerged from Europe in the 19th century.

Vernon Palmer, Tulane University law professor and co-chair of the colloquium's international planning committee, says the celebration is not limited to those with a particular interest in law, but will appeal to non-legal professionals who are interested in history.

“What makes this conference a little bit different is that we're going to celebrate the code's bicentennial by hearing from a number of fine historians and librarians who can give us a contemporary look at the society of that day,” says Palmer. “This isn't just for lawyers.”

The enactment of Louisiana's civil code in 1808  only five years after the Louisiana Purchase  represented the first time that residents who were largely of French and Spanish descent had an opportunity to legislate for themselves, says Palmer. “They decided to treat themselves to the law they understood best and it has done very well ever since.”

All other states in the Union use English common law. Broadly speaking, the difference between civil and common law is that in civil law, a judge will apply rules that are compiled under a civil code, rather than those based on case law.

The colloquium is presented by the Eason-Weinmann Center of Comparative Law and the Tulane Law School, which was the first in the state to offer degree paths in both civil and common law. According to Palmer, more than 80 percent of its students are from outside Louisiana, and the dual program offers them an opportunity that most other law schools cannot.

“The civil law is the most dominant in the world,” says Palmer, adding that the code is heavily influenced by both France and Spain's legal systems. “If students can attend our institution and get both legal systems under their belts, it is a fine achievement and it also prepares them for a much wider world.”

All guests must register online to attend. Same-day registration is available today only from 4â“6 p.m. in Weinmann Hall followed by an opening address at 6 p.m. The event continues daily through Saturday (Nov. 22) with lectures conducted in 40-minute increments throughout the day. A banquet also is scheduled for Friday evening (Nov. 21) at the Plimsoll Club in the New Orleans World Trade Center with full registration.

Tulane faculty, staff and students as well as members of the community are invited to attend. For more information on registration and to download a copy of the program, visit the law school website and click on Eason-Weinmann Colloquium '08.