“American Routes,” the weekly public radio program devoted to music and musicians, stories and cultures from New Orleans, the Gulf South and America at large, is celebrating its 10th anniversary with a concert in New Orleans on Friday (Jan. 16). Tulane University professor Nick Spitzer produces and hosts the program. 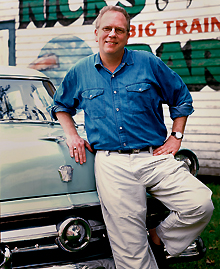 Musicians from Louisiana will help Nick Spitzer celebrate the 10th anniversary of “American Routes” at the House of Blues in New Orleans on Friday (Jan. 16). A Tulane professor, he produces and hosts the weekly public radio program.

The event will be staged in front of a home audience at the New Orleans House of Blues, 225 Decatur St, at 8 p.m.

Nationally syndicated, “American Routes” reaches up to a half million people on more than 200 stations nationwide. Launched in 1998 from its studios in New Orleans' French Quarter, the program started modestly, being carried on only seven stations.

“A lot of people said the program was too eclectic and roots-oriented to succeed at a network level,” Spitzer says. It presents blues and jazz, roots rock and soul, country and gospel, zydeco and Tejano among other styles of American vernacular music.

Within two months of its inception, however, “we had 30 stations, 60 stations by year's end, and within two years we'd reached 100,” he adds.

“American Routes” is produced in collaboration with Tulane University, and co-produced and distributed by American Public Media.

Doors open at 7 p.m. for the concert.