Loyalty and Longevity of Employees Recognized

Fleeing Fidel Castro's communist regime in Cuba, Rogelio Perez came to Tulane University to work as a plumber's helper in 1968. With the wages he has earned in more than 40 years at Tulane, Perez has helped bring, over time, 14 members of his family from Cuba to the United States. Perez is now a plumbing supervisor on the uptown campus and one of five Tulane staff employees who reached their 40-year anniversaries this past year. 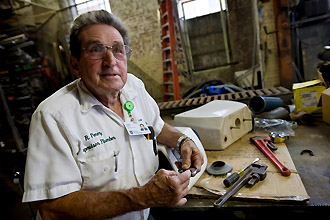 Rogelio Perez, celebrating his 40-year Tulane anniversary, says he wouldn't know what to do if he retired. Perez stays busy as the plumbing supervisor of five employees. (Photo by Paula Burch-Celentano)

A guest list of 191 employees is invited to the Lavin-Bernick Center today (Tuesday) to recognize employment milestones ranging from five to 40 years. It is the first of three events this month. The health sciences campus will have a celebration on April 9 in the Murphy Building, and the party at the Tulane National Primate Research Center will be on April 15.

A total of 343 employees will be honored at the three events for milestone anniversaries reached in 2008.

When Tulane hired Perez as a plumber's helper, it was his first job in the United States. The work represented opportunity and freedom.

“I love the work,” says Perez, who has no plans to retire. “The university has been very good to me. There is no freedom in Cuba. People here don't know what they've got.”

When Perez left Cuba at age 29, his young son, Jose Alfredo Perez, was sick and needed heart surgery. In New Orleans, the boy received surgery to repair a hole in his heart with help from Catholic Charities. Jose Perez grew up and graduated with a business degree from Tulane, taking advantage of the university's tuition benefit for dependents of staff members.

Perez got his start as a plumber's helper at age 14 in Cuba, where his father also was a plumber. It took Perez more than 10 years working at Tulane to earn enough money to pay for his brother, Jose, to move to New Orleans. Jose Perez then worked for many years at Tulane as a foreman in the mechanics shop. His son, Juan Carlos Perez, is now in charge of the mechanics shop, and his daughter, Iviz Boudreaux, works in facilities services as contract coordinator. 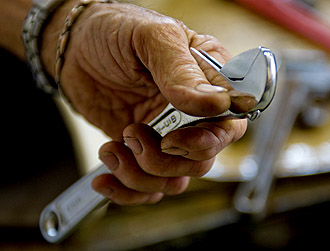 With the experienced hands of an expert, Rogelio Perez continues to work as plumbing supervisor at Tulane, where he has been employed for 40 years.

“The heart and soul of every organization is ultimately its people,” says chief of staff and vice president Anne BaÃ±os.

“At Tulane, we have a staff of committed, loyal and passionate individuals whose daily contributions provide a tremendous foundation for the university's success. The employee recognition events give us the opportunity to celebrate with our terrific staff and thank them for their service to the university.”

At the recognition parties, the university's Workforce Management Organization will award gifts and Tulane pins.

Each recognized employee will be presented with a gift certificate that may be redeemed for an item of their choice from a variety of vendors. They'll also receive a Tulane pin commemorating their milestone anniversary.

The Workforce Management Organization website has a complete list of staff employees who marked other milestone anniversaries this past year.