Making a Difference Through Design

Finding your school at the center of a national media buzz is wonderful, says Kenneth Schwartz, dean of the Tulane School of Architecture. But even more gratifying than the national spotlight, Schwartz says, is teaching and getting to know the “intelligent, ambitious, thoughtful students coming to Tulane.” 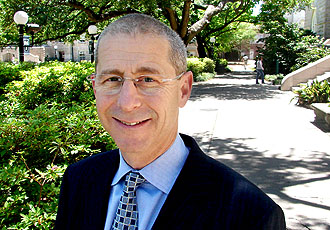 Kenneth Schwartz, dean of the School of Architecture, sees architecture students and teachers as agents of change in the world. (Photo by Kathryn Hobgood)

The architecture school's URBANbuild program is currently featured in a six-part documentary on the Sundance Channel. The show has garnered a very positive review in The New York Times and an A- grade in TIME magazine.

Schwartz became dean at Tulane on July 1, coming to New Orleans from the University of Virginia, where he says one of his proudest achievements was winning the highest universitywide teaching honor  the first architecture professor to be so recognized.

“I am first and foremost a teacher,” Schwartz says.

Since coming to Tulane, Schwartz has started a dean's blog where he has written about his impressions of the school's students during his first few weeks on the job. He says, “Tulane students are designing and building with the highest aspirations of beauty, sustainability and social justice. It is heartening to see how these students have combined their activism with the foundation of a strong design curriculum.”

Good design is the heart and soul of Tulane's School of Architecture. And Schwartz says that the tradition of excellence in design education will continue. He adds that “architectural education is at an exciting moment of change, and Tulane is especially well positioned to develop new paradigms for design education.”

He says that he is “particularly interested in the interaction between the pressing needs and challenges of New Orleans as a city and the potential to strengthen the school's core mission.”

Leaving behind a bucolic region in Virginia, Schwartz says that he is looking forward to the urban challenges ahead. The social, environmental and economic history and conditions of New Orleans present a unique opportunity for him as an administrator and teacher  and for the students who come to Tulane, he says.

“Nowhere is there a more compelling opportunity for constructive interaction than in Tulane's unique relationship with the city of New Orleans.”

Schwartz adds that he came to Tulane and New Orleans because “I want to be part of the process to make a difference through design.”