The Man With the Plan

No matter what kind of hurricane season is ahead for the Gulf Coast, Greg Southworth, Tulane's new emergency response director, has a stern reminder for the campus community: it only takes one, so be prepared. 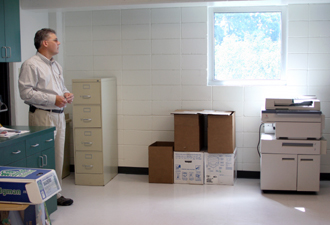 Greg Southworth, director of the Tulane Office of Emergency Response, tours the uptown campus Emergency Operations Center in the new power plant. If the university loses power from Entergy's public grid, the center will run on campus generator power. (Photo by Ryan Rivet)

Atlantic hurricane season began on Sunday (June 1), but Southworth says predictions for an active storm season have no impact on how he is doing his job.

"Really, it doesn't matter if you have 15 storms or one. You have to be prepared to respond to that one storm," Southworth says.

Southworth arrived on campus in April from Shell, where he was an environmental manager and a member of the emergency response team. He says he had to hit the ground running to get up to speed on Tulane's detailed emergency plan and prepare for the 2008 hurricane season.

"The plan had a good foundation," Southworth says. "We made some minor tweaks, but the substance is not much different. Everyone [at Tulane] has been very supportive. They all want to be prepared and they are willing to work to make sure that we are."

According to Southworth, most of the changes to the campuswide hurricane plan have been logistical, improving communications for essential personnel.

"Communication was a problem during Katrina. Cell phones didn't work and satellite phones were unreliable. As another redundant piece, we are adding amateur radio stations in each of the facilities. It will allow communication between uptown, downtown and the primate center, as well as with the Coast Guard."

Southworth says another part of his job will be to educate and prepare students for the possibility of an evacuation. He will work with incoming first-year students during orientation to educate them and their families about how to be responsible for getting themselves out of harm's way. Seven sessions of two-day summer orientation begin today (June 4) for incoming freshmen and their parents.

"A lot of students aren't from the Gulf Coast and don't know much about hurricanes," says Southworth. "The most important thing is to have an evacuation plan. Don't rely on the university or the state and federal government to take care of you."

With that being said, Southworth made it clear the university will do whatever it takes to safeguard the well-being of students.

"We will not leave any students behind. For those students who don't have a way to evacuate, we have a procedure in place. We have busses on contract so we can get students to Jackson State University, in Jackson, Miss. But it should be an option of last resort."

As emergency response director, Southworth says he hopes for the best and prepares for the worst. Part of that preparation will be drills held this summer to identify and correct any problems in the procedures.

"It's one thing to have a plan written out, but you have to practice," Southworth says. "That's why we are doing the drills. It lets you know what works and what doesn't and allows you to make changes."

In the event of an emergency or impending threat, students and employees will receive voice, e-mail and text messages from the university. Students will receive the text messages automatically; however, employees have to sign up for the service. Southworth encourages both students and employees to update their contact information now. Parents can enroll in a parents' Listserv to receive emergency information and other campus news.