Marching Band Steps Out for Carnival

The Tulane University Marching Band will strut its stuff at four uptown Carnival parades this season, and they will not march alone. At the Pontchartrain parade on Feb. 14, the band will be joined by 95 members of the Tulane community, marching along as part of the university's new 10K-a-Day program that encourages employees to gradually achieve a healthy goal of walking 10,000 steps per day. 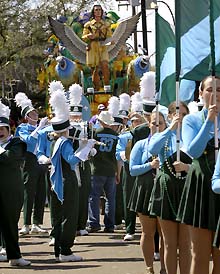 The Tulane University Marching Band will strut its stuff at four Carnival parades this season. (Photo by Paula Burch-Celentano)

Band director Barry Spanier says, “It's in the afternoon on Valentine's Day. We'll finish in time for folks to go out for a romantic dinner with their hearts in good shape.#x201d;

The Tulane Marching Band also will appear in these parades:

The band will be playing fan favorites at each parade, and Spanier says a new number on the playlist will be “Feet Don't Fail Me Now,” featuring the Sousaphone players.

This year, Spanier predicts the band members, numbering more than 55, will march a total of 26 miles. The Tulane University Marching Band made its public debut at Mardi Gras 2006 (following Hurricane Katrina) with less than 25 musicians.

Spanier says he walks with the band all the way on each parade route. “It's exhilarating when the crowds are in your face,” he says. “There's nothing like it in the world.”

This will be the first Carnival parade for Mendel Lee, the new drum line instructor, and the band's baton twirler, Erica Andrew, who is back from her junior year abroad in Paris. Look for the marching band's third annual collectible doubloon; this year it is minted half blue and half green.

The walking-group participants accompanying the band at the Pontchartrain parade will take turns carrying the Tulane University Marching Band banner and will toss Tulane Mardi Gras throws as well. They also will help distribute water bottles and pass out energy bars to band members. Each walking participant receives a free green Tulane shirt and a Tulane University Marching Band cap.

Although registration is closed for participation in the Pontchartrain parade, Tulane groups are encouraged to continue their involvement with the 10K-a-Day program by gathering to walk before work, during lunch and after work for about 25 minutes. Groups are meant for anyone, at any fitness level. Walking groups have formed on the uptown campus, at University Square, at the downtown campus and at the Tulane National Primate Research Center in Covington, La.