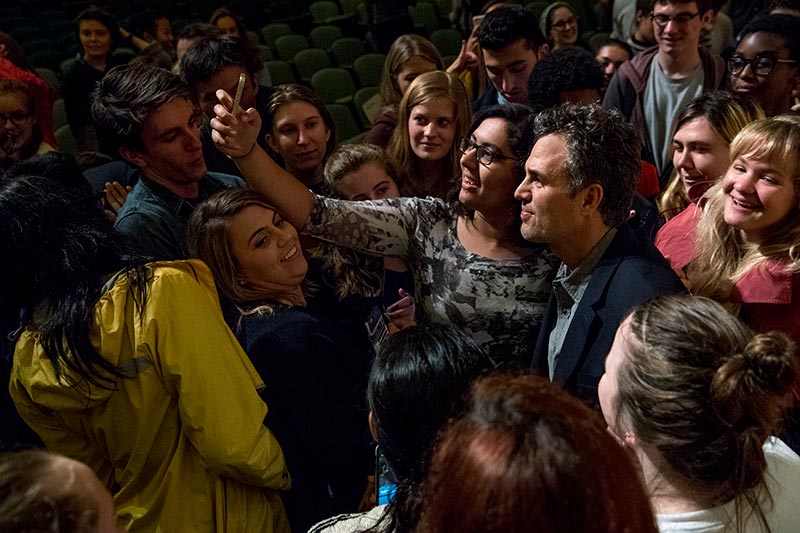 After the lecture, Ruffalo posed for selfies and lightheartedly fielded audience questions, which ranged from one student asking how they could show solidarity with Standing Rock protesters fighting against the Dakota Access Pipeline to another student challenging the actor to describe himself using only three emojis. (Photo by Paula Burch-Celentano)

Whether searching for the truth as an intrepid Boston Globe reporter in Spotlight or harnessing rage as the “always angry” member of the Avengers, Oscar-nominated actor Mark Ruffalo has held many roles throughout his accomplished film career. During a lecture presented by Tulane University Campus Programming (TUCP), Ruffalo discussed his most rewarding role yet — off-screen as an activist.

Ruffalo began by opening up about his early struggles with ADD and dyslexia. He also discussed how coping with the death of a close friend drove him forward in his budding acting career throughout his 20s.

“As an actor, I was advised not to get radical. But the more I’ve engaged, the more meaningful my life has become.”

“It gutted me. I didn’t know how to move forward. I eventually studied with Stella Adler and turned that grief into my artwork,” he said.

An advocate for addressing climate change and increasing renewable energy, Ruffalo also covered how he discovered his second passion for environmental activism after moving his family to upstate New York.

“I call myself an accidental environmentalist,” he said. “We moved to let the kids experience clean water and air but instead ended up in the middle of (a hydrofracking region),” he said.

Asked to attend a town hall gathering in Dimock, Pennsylvania, Ruffalo witnessed residents’ accounts of issues caused by local hydrofracking. The meeting became a catalyst for the actor to become involved in the successful movement to ban the practice in New York state.

“Here’s something I learned while fighting against hydrofracking — if you’re losing hope, you’re not doing enough,” he said.

In 2011, Ruffalo co-founded Water Defense, a nonprofit raising awareness of energy extraction’s impact on water supplies. In 2012, he additionally supported the launch of The Solutions Project, a campaign for the use of clean, renewable energy.

“As an actor, I was advised not to get radical. But the more I’ve engaged, the more meaningful my life has become.”

Keeping it all in the family: Tulane breaks ground on Mussafer Hall
Competition gets students thinking about sustainability
Understanding the complexities of free speech
Tackling self-defense
The More You NOLA: 4 apps to download this fall