A world of opportunity opened up for cell and molecular biology major Jason Mellad when he received a prestigious Marshall Scholarship for postgraduate study at the University of Cambridge in England in 2004. 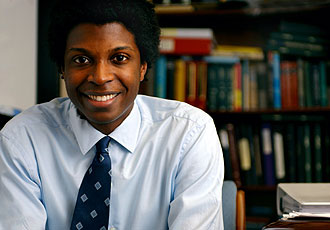 Jason Mellad, who graduated from Tulane with a bachelor's degree in cell and molecular biology, is pursuing a career as a researcher in cardiovascular medicine in England. (Photo by Paula Burch-Celentano)

Mellad earned a bachelor of science from Tulane, beginning his pursuit of a research career in cardiovascular medicine.

The Marshall Scholarship gave Mellad his first chance to go aboard. The scholarship is offered by the British government to finance young Americans of high ability to study for advanced degrees in the United Kingdom.

At Cambridge, Mellad has studied with Catherine Shanahan, a cardiovascular researcher who is investigating the molecular mechanisms of vascular dysfunction in diseases such as atherosclerosis, diabetes, hypertension, chronic renal failure and aging.

“For two years, it was all research, no coursework,” Mellad says of his Cambridge studies. He attended seminars and conferences in Europe, the United States and Egypt. He also was able to work at the National Heart, Lung and Blood Institute in Bethesda, Md., as a National Institutes of Health-Cambridge Scholar.

“Most of my family members have issues with high cholesterol and high blood pressure, and I want to find some sort of cure,” says Mellad, who is from Baton Rouge, La. “I don't want to sit back and see these diseases as inevitable  I want to do something. I want to contribute to textbooks, not just read them.”

This spring semester Mellad came back to Tulane to conduct a seminar at the Tulane Center for Gene Therapy, where he had worked as an undergraduate student. He says he chose Tulane for his undergraduate degree because it offered the opportunity to work in the lab of Dr. Darwin Prockop, director of the center.

“They took a chance on me,” Mellad says. “I came in relatively inexperienced, and they let me get my foot in the door.” He credits individualized attention from accessible professors at Tulane as a key factor in his success.

During his studies at Tulane, Mellad was actively involved in tutoring and other community service activities. He chaired the executive board of the Community Action Council of Tulane University Students (CACTUS).

At Cambridge, he chose to become a member of Clare College, which is known for its political activism and volunteer work. Living in southeast London, Mellad has continued to volunteer by assisting at homeless shelters, working at paint rallies for schools and tutoring young students.

As for his future plans, Mellad wants to combine “issues that I'm passionate about  social justice, education for kids, bringing opportunities to kids” with his passion for scientific research.

“My heart lies in America,” Mellad says. “I want to facilitate programs to train teachers, for kids to gain experience in classrooms like I was able to do.”

Mellad plans to finish work toward his doctorate this summer and graduate from Cambridge in October. He will continue postdoctoral training at Kings College in Pennsylvania.