For the first time since adding an MBA travel component three years ago, the A. B. Freeman School of Business at Tulane sent its entire full-time MBA class  including both first-year and second-year students  overseas at the same time. Organizing the trips was an enormous logistical task, but both organizers and students say the international experience was worth the effort. 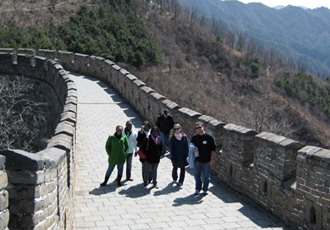 Second-year Tulane MBA students visit the Great Wall of China during their March visit to Beijing. The entire full-time MBA class  both first-year and second-year students  went overseas at the same time. (Photo by Stephen Estrada)

If you think planning an overseas trip can be complicated, just imagine planning two overseas trips for more than 160 MBA candidates during one week in March.

“I don't think the people who were involved with the decision to change the curriculum thought about any of the logistical issues,” laughs John Silbernagel, director of graduate education at the Freeman School. “From day one, we were doing everything, down to calling the airlines and checking the spelling of names on tickets.”

“Everybody has a certain diet,” adds Laney Armstrong, senior program coordinator. “We need to do roommates. We need to do visas for some people. There are just a lot of details involved.”

The entire first-year MBA class traveled to Paris and the entire second-year MBA class went to Beijing as part of the program's Global Leadership Module. Such a feat is relatively uncommon, and few partner institutions overseas have the capacity to accommodate an entire MBA class.

The first-year class  including 89 full-time MBA candidates and seven part-time professional MBA students  traveled to Paris for a week of activities that included classroom lectures, talks from executives with Schlumberger, L'Oreal, Olmeto Capital Partners and A Novo, a company site visit to Alcatel-Lucent, and, to cap things off, a case presentation to the CEO and 11 senior executives of France's Colas Group, one of the world's leading road construction firms. 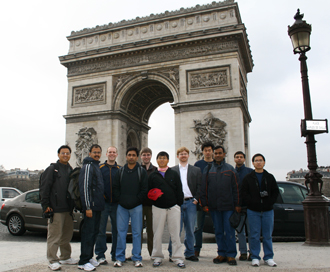 “The highlight of the trip for me was watching my classmates present to the CEO and CFO of Colas,” says Eric Seelig. “We worked since January reviewing their industry and creating a market entry strategy for the company. After each presentation, the executives asked some incredibly difficult questions, but my classmates did a wonderful job defending their positions and offering specific suggestions for ways the company could expand.”

The second-year class  67 students  spent a week in Beijing attending an academic program organized by Tsinghua University, often referred to as “the Harvard of China.” The itinerary included lectures from Tsinghua professors on China's economy and culture, company site visits, and a question-and-answer session with Tulane alumnus Yaokun Hu, who works for Hopu Investment, the leading private equity firm in China. That session was followed by a reception at which students had a chance to network with a dozen Freeman alumni working in China.

“David Li, one of our guest lecturers, spoke to the G-20 last week,” says Will Donaldson, an MBA student who will graduate in 2009. “It was definitely the highlight of the Global Leadership series of courses and has had me thinking for several days. His insight was invaluable.”

Despite the logistical challenges in delivering two international programs simultaneously, Silbernagel says the benefits of the trips make them more than worth the effort.

“You can study a lot and talk about a lot of things in the classroom, but I don't think there's any substitute for actually being there and appreciating the cultural differences,” Silbernagel says.

“The trips add to the teamwork component of the program,” adds Stephen Estrada, director of professional education. “It helps build unity within the class because they're traveling half way across the world with these people. I think it adds a special dimension to the MBA program that you wouldn't have without something like the Global Leadership Module.”