Environmentalist and author Bill McKibben was on campus Saturday (April 4) sounding a call to arms for reversing the effects of global warming in the narrow window of time that remains to do so. 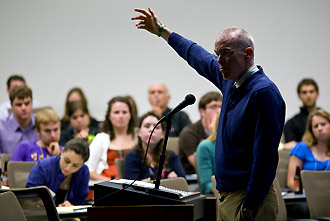 Some scientists assert that if we haven't made fundamental changes to our energy systems by 2012, it may be too late, environmentalist Bill McKibben told attendees of the Tulane Law School Summit on Environmental Law and Policy.(Photos by Paula Burch-Celentano)

The speech was the keynote address for the 14th annual Tulane Law School Summit on Environmental Law and Policy. Introduced by law professor Oliver Houck as a “rock star” of the environmental movement, McKibben has been speaking and writing about climate change for two decades, long before it was a focus of the public's attention.

His book The End of Nature is considered the first book written for a general audience to address global warming. Twenty years after the book's initial publication, McKibben believes the time is now to remediate the behavior that has led to this environmental crisis.

McKibben said that some scientists assert that if we haven't made fundamental changes to our energy systems by 2012, it may be too late to stop a catastrophic chain reaction in the environment.

“If we did everything right, we could shut off the carbon  stop burning coal, gas and oil. But if we don't do it very soon â¦ if we let this process get out of control, then the possibility of bringing it back under control is dim, at best.”

In the past 18 months, said McKibben, climate change researchers at NASA have quantified the plight of global warming in a ratio that designates the level of carbon dioxide concentration in the atmosphere that is “not compatible with the planet on which civilization developed”  350 parts per million. 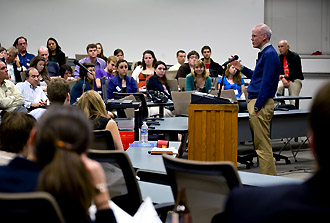 Audience members at Tulane Law School give Bill McKibben their full attention as he charges them to get involved in environmental issues.

“It's a very useful number, and it's also one hell of a tough number,” McKibben warned. “We're already past it. We're at 387 parts per million, and rising about two parts per annum.

McKibben wrapped up by pleading with those in attendance to get active and do whatever they felt they could to make leaders take notice of what he called a “global crisis.”

“I don't have any guarantee that this, or anything, will work,” said McKibben. And while it is “more than plausible” that we have already waited too long, “the consensus at the moment is that a narrow window remains open. It is narrow and closing quickly, which makes it incumbent upon us to try to jump through it.”