Holiday shopping during periods of economic downturn doesn't have to be gloomy. In fact, the IN Exchange shop located in the Lavin-Bernick Center on the Tulane University uptown campus provides in-store and online gifts that are not only affordable, but can add meaning to the merchandise. 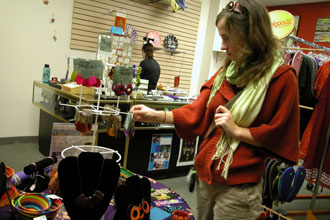 A campus shopper looks over merchandise at IN Exchange in the Lavin-Bernick Center on the uptown campus. The store specializes in fair trade merchandise. (Photo by Alicia Duplessis Jasmin)

"I want people to understand that purchasing a fair trade gift, even a small item like a pair of earrings, can make a significant positive impact in an artisan's life who is living in poverty," says Erica Trani, founder and director of IN Exchange.

Fair trade, she explains, is the guarantee that domestic and international artists and business owners are provided fair wages and humane work environments.

A fair trade gift takes on a greater meaning and makes a difference in the artist's life, Trani says, "which reminds us to be compassionate, generous and aware of our interconnectedness."

In preparation for some of the store's busiest days, Trani created a list of fair-trade gifts under $25 to distribute around campus. A 2007 Tulane graduate, she hopes to encourage more shoppers to choose fair trade this holiday season.

"Fair trade is taking a beating during this recession because people, more than ever, are attempting to maintain their same level of consumerism for less money," says Trani, who purchases the items in her store from fair-trade suppliers. This season, IN Exchange contains an inventory of T-shirts, scarves, ladies' apparel, jewelry and artwork from artists both local and abroad. Many of the items in the store are verified as fair trade by the Fair Trade Federation.