At a time when many are losing health insurance due to layoffs or changes in job status, a Tulane University medical student is making it easier for families to find information about free health clinics in the New Orleans area. 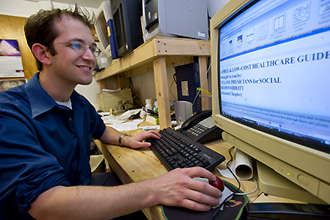 The listing, which is also distributed via paper pamphlets at area homeless shelters and community centers, includes each clinic's hours of operation, cost of health care, population served and the types of medical care offered at the facility.

“With the economy in a recession, people are struggling with healthcare costs and feel like they don't have access to care,” Brucker says. “I want people to know that there are resources out there for them so that they can get the medical help they need.”

Brucker created the listing more than a year ago as a resource for the city's homeless who had gathered in Duncan Plaza and has continued to expand the list to include resources beyond programs strictly aimed at helping homeless individuals.

The site includes links to maps that give directions to each clinic. It also features information about low-cost prescription drug programs providing $4 prescriptions, including a custom search feature that allows users to determine quickly if a drug is available at the discounted rate. 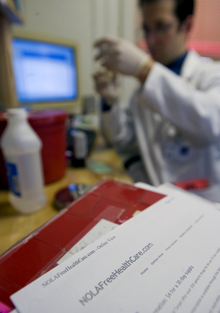 In addition to its Internet presence, Brucker's healthcare guide also is distributed via paper pamphlets at area community centers and shelters.

Brucker, who volunteers at Ozanam Inn homeless shelter in New Orleans, says he learned how important low-cost prescription programs can be when he counseled a man who had been battling a skin infection.

The man had seen a doctor who gave him a prescription for an antibiotic. When the man tried to get the prescription filled at a drugstore, the medicine's $60 price was out of reach. The prescription was never filled, Brucker says.

He hopes that physicians and patients use the site's search feature to find out if treatments are covered by the $4 programs. “I think it is really going to help people afford their care,” he says. “If they can't afford the care, they should really let their doctor know.”

Brucker says he has gotten lots of positive responses from clinics listed in the site. Several people have started to e-mail him updates about additional care offerings and changes in services.

He says his guide is one of the few that is continually updated. “The website always has up-to-date information,” he says.

Brucker is getting national recognition for his work in creating the site and volunteering to help the homeless through his work with the student chapter of Tulane Physicians for Social Responsibility.

He is slated to receive a 2009 American Medical Association Foundation Leadership Award on March 11 at a ceremony in Washington, D.C. The group is paying to send him to a three-day advocacy and leadership conference.