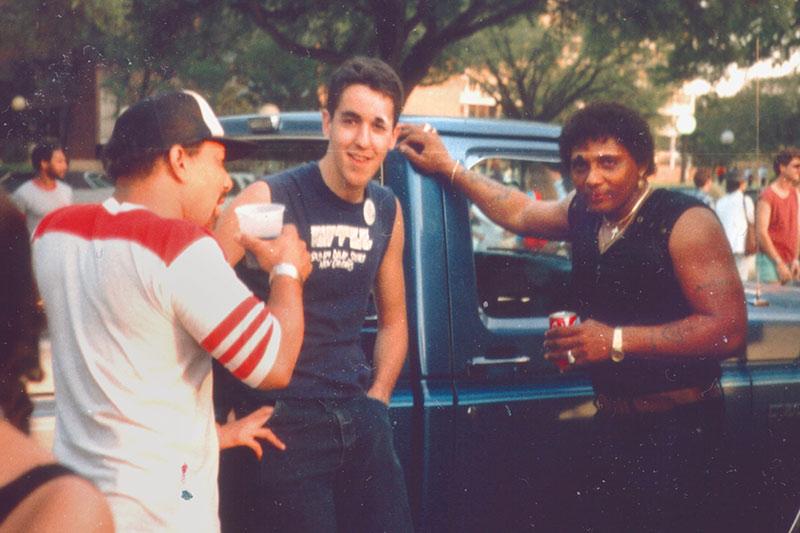 Ivan Bodley (center) back in the day (1984), when he was musical director for WTUL, schmoozes with Neville brothers Art (left) and Aaron (right). Bodley, like the Nevilles, stayed the course in the music industry. (Photo from Ivan Bodley)

Ivan Bodley, a 1986 alumnus, has come a long way since his days as the musical director of Tulane’s student-run radio station, WTUL. Known in the industry as “Funkboy,” Bodley has become a renowned bass player and musical director to the stars. But he wasn’t always sure he belonged in front of the footlights.

“I was a senior in high school before I picked up the Fender bass,” said Bodley. “I’d had other music lessons, growing up in Chattanooga, but somehow that Fender bass chose me. It fits my personality more than the lead guitar. I don’t have to be out there in front, saying, ‘Look at me.’ I like to be a part of the ensemble, part of the foundation, part of the driving force that makes you want to dance to a given selection.”

After graduating from Tulane, Bodley relocated to Los Angeles, where he worked for Epic Records as a publicist, but soon realized the business side of the industry was all about marketing and not about the music.

"I got an earful of music while in New Orleans, even playing pickup with the likes of Bo Diddley. I decided that playing music was what I wanted to do with my life."

“I had interviewed groups like the Ramones while at WTUL,” said Bodley, “and I got an earful of music while in New Orleans, even playing pickup with the likes of Bo Diddley. I decided that playing music was what I wanted to do with my life. That being the case, I needed to be fully educated, so I headed for Berklee.”

“The specific style of funk I was gravitating toward came out of that city,” said Bodley. “New York is my tempo, and now I’ve just bought a house there with my earnings, and I’ve never had a day job in 22 years.”

Inducted into the Blues Hall of Fame in 2011, Bodley has also played Carnegie Hall and the Kennedy Center and has performed with 46 Rock & Roll Hall of Fame inductees. For Bodley, music is the universal language.

“I was recently in Japan and hooked up with three musicians,” Bodley said. “We had no language in common, but we had the 12 tones of the musical scale … and that was enough.” Check out Bodley’s website: www.funkboy.net.

This article first appeared in the June 2017 issue of Tulane magazine.