Meet us at the cemetery gates 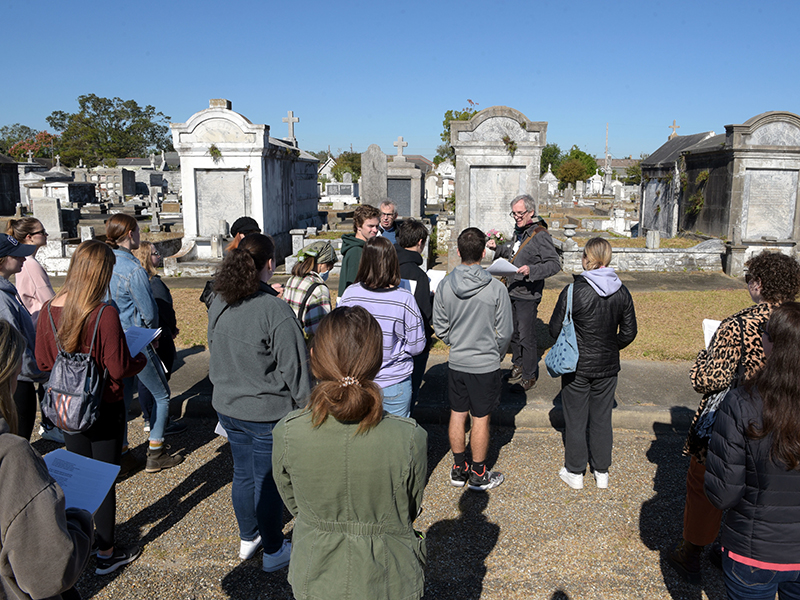 If one follows the broad boulevards and narrow pathways between the gravestones of local cemeteries, one will discover a multitude of stories – lives of people that now exist only as memories.

The acts of remembering and honoring the dead, as well as contemplating the mortality and interconnectedness of humans, are the primary motivations behind the annual Graveyard Poets reading organized by Michael Kuczynski, professor in the Department of English at the School of Liberal Arts.

“The graveyards are beautiful places as well as being sometimes scary, but they’re sacred spaces as well, where we can learn about ourselves, and what connects us to other people,” said Kuczynski.

Kuczynski has been organizing The Graveyard Poets for the past 10 years, as the faculty lead for the Books and Reading Scholar Society, one of 14 different first-year honors scholar societies offered through Newcomb-Tulane College. The Scholar Societies offer incoming first-year students the opportunity for direct engagement with a faculty mentor and participation in informal learning that supplements their classes.

This year’s Graveyard Poets reading, which took place on Saturday, Nov. 6, at Carrollton Cemetery No. 1, included three groups of students: Kuczynski’s Books and Reading Scholars, students from The Graveyard Poets course taught by Melissa Bailes, associate professor of English, as well as students from another scholars’ society, Life and Death in New Orleans, led by Emily Harville, associate professor of epidemiology at the School of Public Health and Tropical Medicine. Also in attendance was Peter Cooley, emeritus professor, former head of the creative writing program in the Department of English and former Louisiana Poet Laureate.

Kuczynski spoke about many aspects of the cemetery itself — that it was originally segregated by class and race, is the site of numerous veterans’ graves, contains exquisite architecture and decorative features, and that it was built, like many cemeteries in New Orleans, in a cruciform pattern.

“There's a road straight through and then one that runs across. The reason for that, of course, is because a cross is a sacred symbol, but there's a superstitious reason as well. It was thought that if you bury people at a crossroads, or in some kind of cross-like arrangement, their souls were likely to stay at rest, rather than wander,” explained Kuczynski.

History and aesthetics aside, the main focus of the outing was to have a poetry reading in the cemetery, reciting works of the Graveyard Poets, a popular genre of poetry in the 18th century.

“It moves from a largely devotional focus, written by all the clergyman founders of the genre, into Gothic and introspective forms. Those Gothic and introspective elements were present from the beginning, but they become more secular, once there was a bit of a pushback against the movement, which happened about a decade after it began,” said Bailes.

“Poetry itself, just like cemeteries, is a form of remembrance,” added Kuczynski.

As the group of students and faculty moved throughout the cemetery, the readings took place at various sites, some with simple gravestones and others marked by elaborately decorated mausoleums. The anthology of poetry assembled for the event included the poems Elegy Written in a Country Churchyard by Thomas Gray, This Living Hand  by John Keats, Because I Could Not Stop for Death by Emily Dickinson and Dear Lovely Death by Langston Hughes.

Lauren Duncan, a first-year English and architecture major and member of the Books and Reading Scholar Society, was enthusiastic about the event.

“It was educational because I'm not familiar with the customs of New Orleans and I didn't quite realize the cultural significance and how important these graves are to some of these families,” said Duncan, who hails from Kernersville, North Carolina. “I’ve also never read poems in a graveyard before so that was a very interesting experience.”

In addition to the poetry reading, Kuczynski is introducing a new community service project, giving students the opportunity to assist with cemetery cleanup throughout the year, and perhaps further understand that death is a part of life.