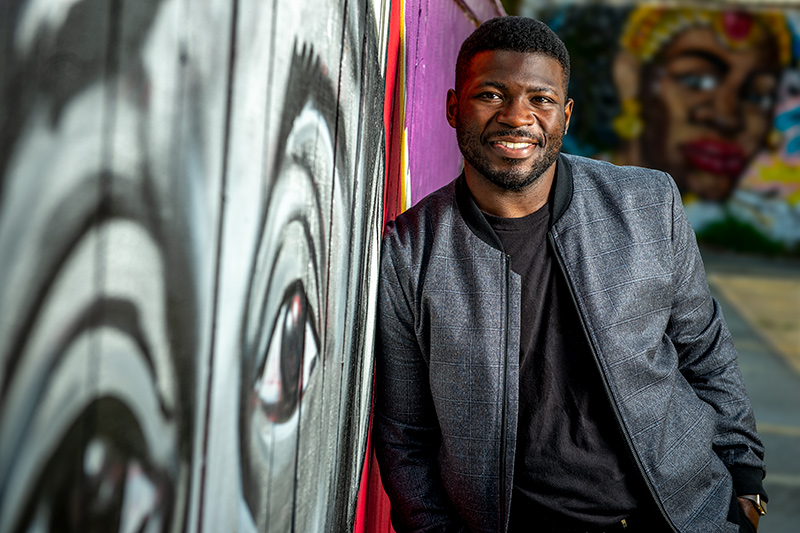 Tulane PhD candidate Curtis Davis Jr. will receive a degree in social work on Saturday and will join the faculty of the University of Southern Mississippi. His research centers around racism-based trauma. (Photo by Paula Burch-Celentano)

Curtis Davis Jr. graduates on Saturday with a doctorate in social work. It’s impressive that he earned the PhD in less than three years, having arrived at Tulane with a master’s degree and several years of professional experience, also in social work.

More impressive is that he leaves Tulane — heading for a faculty position at the University of Southern Mississippi — with a deep mindfulness of the communities he encountered while in New Orleans. His dissertation on the idea of racism-based trauma encouraged him to maximize the conversations he had on a daily basis, as a reminder that “community” can be found in small interactions.

These conversations seem to be a theme with Davis, who titled the dissertation, after seven drafts, “Lifting the Veil:  Considering the Social Worker’s Approach to Racism-Based Trauma in Work with the Incarcerated Person.”

“ ... the interactions that I've had with people and the lessons that I've learned have prepared me for a long and fruitful career.”

“I wanted social workers to conceptualize racism-based trauma, because how you conceptualize it helps in how you explain it to a client or to a colleague or to a judge,” Davis said, adding that the topic applies to higher education, medicine and other fields as well.

He chose USM, he said, because he wanted to teach and conduct his research on a campus that, like Tulane, values the pushing of boundaries and pursuit of sometimes-difficult conversations. “That’s sort of what the research calls for,” he said.

As a fellow of Tulane’s Mellon Graduate Program in Community-Engaged Scholarship, Davis joined the City, Culture and Community program and also worked as a graduate assistant in the Office of Multicultural Affairs. The cohort taught him that as a young researcher, it’s possible to do good research on a topic that interests you — especially when it takes you down unexpected paths. Or when some of the questions you ask have no clear answer.

“The knowledge that has been bestowed upon me and the interactions that I’ve had with people and the lessons that I’ve learned, I think, have prepared me for a long and fruitful career,” he said. “I have direction and purpose with what I want to do.”

The direction came from the classroom — and beyond. Through the Mellon program, “I got a chance to work and interact with students, particularly students of color, just in passing … hearing stories and hearing narratives,” he said. “I consider that to be a privilege, and what I've heard are stories that I'm going to take with me.”