NÃ©lia Dias, the Andrew W. Mellon Professor in Humanities at Tulane University for the spring 2009 semester, has organized a lecture series on “Measurement and Knowledge: The Quantification of Bodies and Minds.” The lectures will examine the instruments and methods used to measure human bodies and mental capacities from the 19th century to the present. 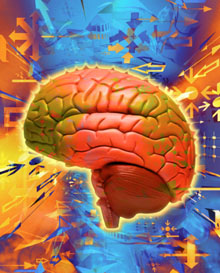 A lecture series organized by NÃ©lia Dias, the Mellon Professor in Humanities for the spring semester, examines methods used to measure minds and bodies throughout history. (By Don Farrall, Getty Images)

The first lecture of the series will be presented on Friday (March 13) at 4 p.m. in Hebert Hall, when Ken Alder, a professor at Northwestern University, discusses the polygraph machine and American justice.

“The lecture series aims to explore the uses and role of measuring individual actions, bodies and mental capacities, through a detailed examination of categories, instruments and methodologies,” says Dias. “It seeks to point out how measuring processes and the values underlying them are embedded in, but also constitutive of, the broader culture they share.”

Dias is visiting Tulane from the University of Lisbon in Portugal, where she is an associate professor in the Department of Anthropology. She specializes in the history of anthropology and ethnographic museums. The author of two books and several articles, Dias in recent years has researched the measurement and representation of the senses in the physical anthropological and medical discourse of late 19th century France.

“In my current research I attempt to write a history of the senses from the perspective of all those others ('primitives' and 'peasants') who had their senses disciplined  but never completely subdued  by the colonial apparatus, medical profession and social reformers,” says Dias.

The lectures are part of an honors colloquium taught by Dias this semester, called “Bodies, Measurement and Culture.” The other guest speakers in the lecture series are:

â¢ March 20, John Carson, associate professor, Department of History, and director of the Science, Technology and Society Program, University of Michigan, “Measurement and Its Ambivalences: Assessing Mind and Merit in Early 20th-Century France and America.”

â¢ April 3, Norton Wise, Distinguished Professor of History at the University of Californiaâ“Los Angeles and co-director, UCLA Center for Society and Genetics, “Neo-Classical Aesthetics of Art and Science: Hermann Helmholtz and the Frog-Drawing Machine.”

The series, which is free and open to the public, is made possible by a grant from the Andrew W. Mellon Foundation and is sponsored by the Honors Program at Tulane University. A reception will follow each lecture.