On Friday (July 11), Tulane lost one of the most distinguished alumni in the history of the university. Dr. Michael DeBakey, who earned undergraduate and medical degrees from Tulane, died at Methodist Hospital in Houston. He would have been 100 years old in September. 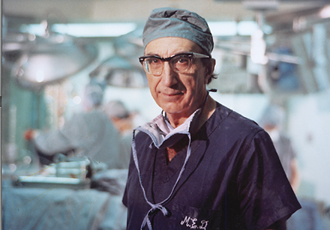 Dr. Michael DeBakey will be remembered for his many advances in cardiovascular surgery that began while he was a student in the Tulane School of Medicine. (Photo from Baylor College of Medicine)

He continued to perform heart surgery until his 90s and this past spring received the Congressional Gold Medal, the highest civilian honor awarded by Congress, at a ceremony in the rotunda of the U.S. Capitol.

A native of Lake Charles, La., DeBakey received his bachelor of science in 1930 and his medical degree in 1932 from Tulane. He continued his academic studies at the university, earning a master of science in 1935.

Following an internship at Charity Hospital in New Orleans, he studied in Strasbourg, France, and Heidelberg, Germany. Returning to the United States in 1937, he came back to Tulane, serving on the faculty of the School of Medicine's Department of Surgery until 1948.

DeBakey's many contributions include inventing, while still a medical student, a pump for blood transfusions that was used in the first successful open-heart operation, performing the first successful coronary bypass surgery and helping establish the concept of mobile army surgical hospitals or MASH units.

DeBakey performed the first successful procedures to treat patients who suffered stroke-causing aneurysms and developed a series of innovative surgical techniques for the treatment of aneurysms. He also was the first physician to successfully use a partial artificial heart for a patient who could not be weaned from a heart-lung machine following open-heart surgery.

DeBakey supervised the first successful multiorgan transplant, in which a heart, both kidneys and lung were transplanted from a single donor into four individual recipients. He pioneered the field of telemedicine with the first demonstration of open-heart surgery transmitted overseas by satellite. He worked with NASA engineers, refining existing technology to create the DeBakey Ventricular Assist Device, which may eliminate the need for heart transplantation in some patients.

In 1948, DeBakey became chair of the Baylor College of Medicine's surgery department in Houston. In 1969, he was named president of Baylor, and in 1978 he assumed the post of chancellor, a position he held until 1996, when he became chancellor emeritus.

President Lyndon Johnson named DeBakey chair of the President's Commission on Heart Disease, Cancer and Stroke in 1964. Johnson also honored DeBakey with the Presidential Medal of Freedom in 1969, and in 1985 President Ronald Reagan conferred on him the National Medal of Science.

DeBakey will be forever remembered as “a giant among men and a person who made a profound difference in the lives of so many,” said Tulane President Scott Cowen.

In the aftermath of Hurricane Katrina, DeBakey arranged for Tulane Medical School to set up operations for an entire year at Baylor College of Medicine until the medical school recovered from the storm. He welcomed hundreds of Tulane medical students and residents to their temporary home.

“I was honored to know Dr. DeBakey personally and to count him as one of Tulane's most distinguished alumni,” Cowen said. “We were fortunate to have him as part of our community and our memories of his greatness and humanity will always serve as an inspiration for a life worth living.”