In the midst of the pandemic: The luminous, fantastical and endlessly fascinating world of Hunt Slonem 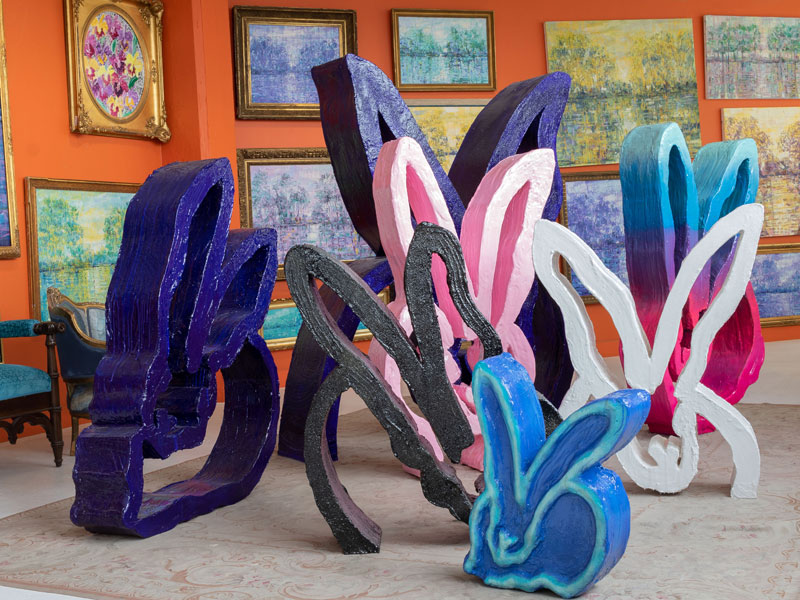 Hunt Slonem sits in a chair that once belonged to Napoleon Bonaparte’s brother Joseph. “Believe it or not, he lived in New Jersey,” he tells me. Slonem is a baritone who speaks with a punctuated, deliberate cadence. He chooses his words carefully, and he loves sharing pieces of arcana, like the one about Joseph Bonaparte.

He’d once called himself “a glutton for color.” The room he’s in, I learn, is painted “cerulean blue.”

Originally, we had intended to talk in person, at Madewood, his Louisiana home on the banks of Bayou LaFourche about an hour south of Baton Rouge, but now, we were in the middle of a global pandemic, and Slonem wisely decided to remain in Brooklyn, New York. At one point, his partner politely interrupts our conversation.

“People gravitate to art because of the joy that comes out of it. In times of trouble, we turn to art, and we see art’s true value.”

“They just announced a two-week lockdown,” Slonem says. “Well, this is the scariest thing I’ve ever heard.”

Without even taking a breath, his tone shifts. “Anyway, let’s get back to the magic of Louisiana.”

Hunt Slonem is — arguably — the most important artist to emerge from Tulane University since Ida Rittenberg Kohlmeyer.

He’s a painter, a printmaker, a sculptor, an entrepreneur, an educator, a writer, a historic preservationist, the subject of several books, including one in Italian and two in Russian, and a conservationist.

His works are featured in the most respected museums and private collections in the world. And, although he’s based in New York, Slonem has devoted outsized attention to Louisiana.

New Orleans, of course, is what first drew him to Louisiana, nearly 50 years ago, when he was a wide-eyed college student still trying to figure out the beginning of his life’s journey.

But unlike other prominent artists who visit Louisiana, Slonem hasn’t limited his shows, or his love of Louisiana, to New Orleans. He’s hosted multiple major museum exhibitions across the state.

Slonem has always enjoyed traveling to far-flung destinations. In high school, he spent a few months in Nicaragua as an exchange student, and before his time at Tulane, he spent a year in San Andrés Cholula, in the central highlands of Mexico.

Although you won’t find his signature on the front of any of his works, Slonem’s art is distinctly his own and somehow still remains instantly recognizable. “I believe in the magic of Louisiana so enormously that it brings tears to my eyes. I have come back to Louisiana every year since I graduated from Tulane in 1973,” Slonem tells me.

“There is nowhere else that has the flavor and the sensibilities of New Orleans — the way it is put together with such particular flair and taste and sophistication and history.”

As a fellow graduate, I saw my conversation with Slonem as a way of shining a spotlight on Tulane University’s most important living artistic alumnus. It was also an opportunity, more broadly, to explore Slonem’s strong connection to Louisiana and his artistic legacy.

First, though, I wanted to know why he had been drawn to Louisiana. “There is just this uncertain survival aspect to Louisiana which makes it even more romantic,” he says. “The stories, the dusting of cobwebs with gold for wedding parties, just the whole magic of all of it captivated and mesmerized me real early on. Listening to all these stories and the remnants of it that still exist and that you participate in are just magic.”

Slonem’s love affair with the state is plainly evident in his artwork.

Nearly 80 years ago, writer Horace Reynolds described the area around Bayou Teche as “a land of ghostly cypresses, sleepy waters, noisy birds, and deep skies.” Slonem captures the ethos of the bayou in paint as eloquently as Reynolds had in the written word.

When Slonem was a student at Tulane, for the first time in his life, he was able to study art, history and architecture, subjects that would define his career.“When I got to Tulane, I was able to take courses that mesmerized me. I got an A in Italian Renaissance Art History from Professor Shapiro, which I consider the greatest accomplishment of my life,” jokes Slonem. “My favorite Tulane memory was taking Louisiana architecture from Sam Wilson.”

Wilson, who is responsible for ensuring the rehabilitation of the Cabildo and the Pontalba buildings in Jackson Square, was widely considered to be the “dean of historic preservation” in New Orleans.

“Look what it led to later in my life,” Slonem tells me.

Looking back at his time at Tulane, he says, “It was a rich lifestyle just being enveloped by history, and not to be tacky, but ‘vestiges of grandeur,’ to quote Richard Sexton. It gave me a sensibility of patina and the mixture of periods that has lasted my entire adult life.”

In Wilson’s class, Slonem visited Madewood, the home he would one day own.

Some of Slonem’s fondest Louisiana memories came while he was a student at Tulane. It was there where he first developed a passion for architecture, graduating among the top of his class with degrees in art history and painting.

For me, the conversation with Slonem was a lot like his art. It provided a much-needed escape from the less-than-joyous realities we are confronting every day.
On the subject of art and life, he left me with one final musing.

“Joy,” he tells me, “is precisely what we need right now. People gravitate to art because of the joy that comes out of it. In times of trouble, we turn to art, and we see art’s true value.” 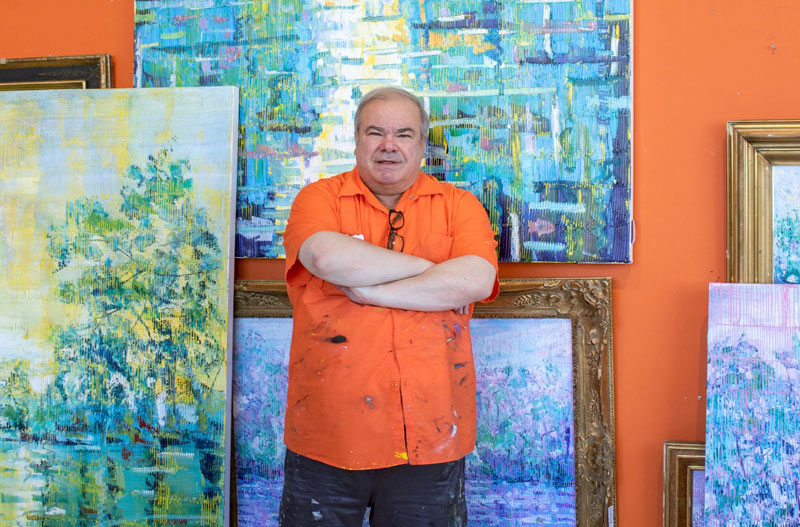 Hunt Slonem poses in front of a collection of his paintings of Louisiana’s Bayou LaFource and Bayou Teche at his studio in Brooklyn, New York. April 28, 2020. Photo courtesy of the artist.