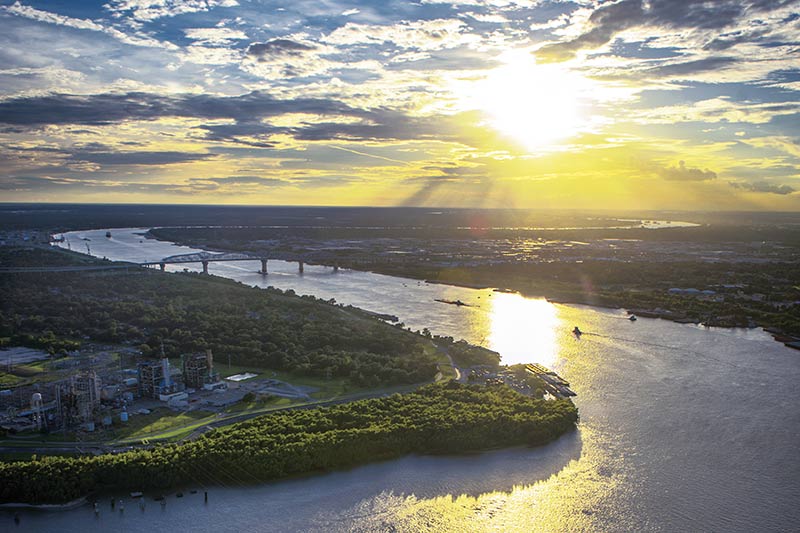 The crescent of the Mississippi River that gave New Orleans its nickname winds into the sunset. (Photo by Jackson Hill)

Amble just a stone’s throw downriver of Mardi Gras World, upriver of the Crescent City Connection Bridge, on the East Bank of the mighty Mississippi River in New Orleans, and you’ll note a sleek, modernistic grey building with water-retention gardens in front.

Within the interestingly patterned walls of the new Tulane River and Coastal Center, remarkable things are happening: The crème de la crème of scientists are putting their heads together to solve the enormous problems of coastal restoration, in the wake of eroding wetlands and rising seas, in Louisiana.

The River and Coastal Center is a new $5.5 million, 5,500-square-foot facility on the riverfront campus. The center is a component of the newly established ByWater Institute, bringing together researchers from across the university to address how to negotiate water’s peril and promise.

“There was a poignant silver lining to the catastrophe, not in an environmental sense, but in that it accelerated our efforts to move this project forward.”

“The idea [for a riverfront campus initiative] was hatched in the early 2000s,” said Mike Blum, associate professor of ecology and evolutionary biology, Eugenie Schwartz Professor of River and Coastal Studies and director of the ByWater Institute, “when it was referred to as the RiverSphere Initiative, which envisioned a campus dedicated to merging the arts with science and engineering. But Katrina waylaid the project for many years.”

As the city recovered from the 2005 Katrina flooding, momentum for the riverfront initiative slowly picked up steam. Efforts shifted to address promising opportunities for economic development in the region, with an initial focus on establishing a test facility for river turbine technology for hydroelectric energy production.

But the initiative pivoted to focus on coastal protection and restoration to support implementation of the Louisiana State Master Plan in the aftermath of the Deepwater Horizon disaster, the nation’s worst offshore oil spill, in 2010.

Want to keep reading? Click here for the full story.

This story originally appeared in the December 2016 issue of Tulane magazine.