A wide range of issues surrounding the transition to adulthood among young people in Vietnam is the focus of research by Tulane public health researcher Mark VanLandingham, who has spent the fall semester in Vietnam as a Fulbright Scholar. 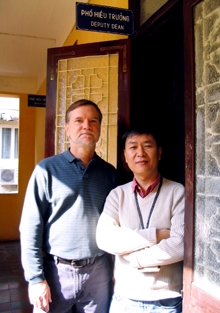 VanLandingham, the Thomas C. Keller Professor of International Health and Development at the Tulane University School of Public Health and Tropical Medicine, plans to build on earlier research in Vietnam and Thailand, working with faculty and researchers at the Hanoi School of Public Health in Hanoi. Sponsored by the U.S. Department of State, the Fulbright Program sends 800 faculty and professional abroad each year.

“Today in Vietnam it is very common for young villagers to move from their village/agricultural life to the cities in order to get work in a factory or office or some other job,” says VanLandingham. “It's the biggest demographic shift currently occurring in Vietnam and the rest of the developing world. It is a change similar to what the U.S. went through throughout the 20th century, with massive migration from the farms to the cities.”

VanLandingham has been studying a similar demographic shift in Vietnam's neighbor, Thailand, for a number of years.

“Thailand is relatively advanced with a quite-developed economy, but Vietnam is less developed and much poorer,” he says. “Vietnam's rapid urbanization and high rates of economic growth are being fueled by its recent opening up to international commerce, a national transition widely referred to throughout Vietnam as doi moi, or 'the new change.'”

A chief focus of VanLandingham's research will be associated changes in behavior and perspectives found among migrants.

“Most of these migrants are quite young,” says VanLandingham. “They are mostly in their late teens or 20s, so they are at exactly at the ages when they are naturally interested in dating, sexual behavior, marriage, all the central transition-to-adulthood issues.”

VanLandingham's research will assess the effects of new opportunities for social and sexual experimentation that the migrants will find away from the social constraints within their home villages.

“Say someone was interested in trying drug use  those opportunities are more easily found in an urban area than in a rural one,” says VanLandingham. “Or if a young person wanted to experiment with sexual behavior, it's a lot easier to try this out in a city than back home in the village where everybody knows everybody else and everyone is monitoring what everyone else is doing.”

Such behaviors in the freer urban settings increase the chances that a person will experience exploitation, contract HIV or encounter other negative outcomes, according to VanLandingham. But there can be positive outcomes, too.

“There is a lot of opportunity for making money and trying to advance socio-economically in the city that wouldn't be open to them in the rural areas,” says VanLandingham. “So it is a mixed bag of opportunity and risk.”