Drawn by the chance to experience African and Caribbean dance and drumming, students and dance professionals converge on the Tulane University uptown campus starting June 30 for the 12th annual New Orleans Dance Festival, hosted by the Newcomb Dance Program. 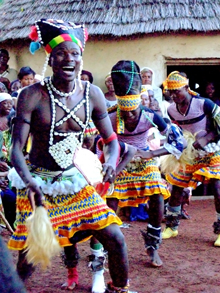 The dancers will participate in lively dance history lessons that will have their hips moving and hearts thumping. Beverly Trask, festival curator and associate professor of dance at Tulane, has organized the festival since its inception and says that the event continues to evolve as it gains international acclaim.

“This year's festival is designed to show the migration of movement as people traveled from Africa to the Caribbean and then to New Orleans,” says Trask. “After the Haitian revolution people fled into Cuba and eventually made their way to New Orleans. The city truly became a gateway to many different types of dance.”

The festival attracts dance lovers of all ages and skill levels to Tulane each summer. This year, Trask has received reservations from participants from as far away as New York and Michigan, with one student traveling from Africa.

The 13-day festival continues through July 12 in McWilliams Hall on the uptown campus.

Dancers have the option of taking as many as six classes each day, with classes in the history of dance offered along with dance instruction.

The festival offers dynamic history lessons, says Trask. “Often times the rhythms [of the dances] have a message and the movement has symbolic meaning. Dance is a gestural language.”

Two public performances are open to the public at a cost of $5. The first will be held at Congo Square in downtown New Orleans on Sunday, July 6, beginning at 4 p.m. Also, on July 12, the culminating dance event will be in room 300 of McWilliams Hall on the uptown campus at 1 p.m.