More than $1.3 million raised during Give Green 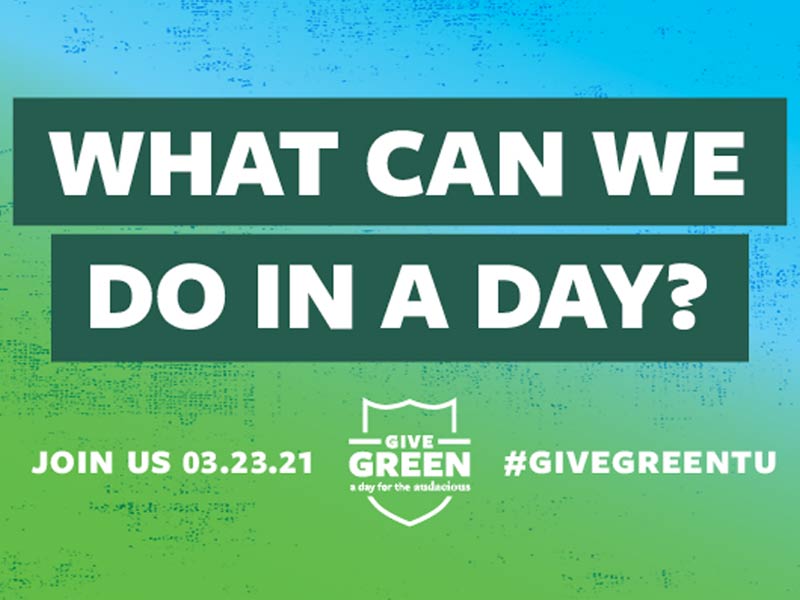 Tulanians raised over $1.3 million during the 24-hour "Give Green: A Day for the Audacious" event, held on March 23. Tulane alumni, parents, faculty, staff, students and friends made nearly 4,000 gifts.

What did Tulanians do in a day? They broke past fundraising records and showed audacious generosity. Thousands of Tulanians came together to raise over $1.3 million on Tulane University’s fourth annual giving day.

During the 24-hour Give Green: A Day for the Audacious event held on March 23, Tulane alumni, parents, faculty, staff, students and friends made nearly 4,000 gifts to support what they love most about the university. Most significant is that the generosity these donors showed on Give Green will make a real impact at Tulane, fostering first-class academic programs, groundbreaking research, transformative experiences and much more.

“The generosity of the Tulane community is remarkable,” said Jenny Nathan Simoneaux, executive director of Annual and Leadership Giving at Tulane. “Give Green proved that Tulanians are resilient, hopeful, and above all, audaciously generous. When we come together, there really is no stopping what we can accomplish.”

The successful event has become a significant annual milestone for the university, as more people consistently turn out every year to show their support for Tulane. This year’s total, for example, represents an almost 200 percent increase over the amount raised in the first-ever Give Green in 2018.

Excitement for the day echoed across the globe – and hit close to home: Contributions came from all 50 states and 12 countries, and 620 Tulane faculty and staff members made a gift.

More than three dozen gift challenges and matches – another record – allowed donors to amplify the impact of their gifts and win extra funds for their chosen areas of the university.

The Cathy and Hunter Pierson Big Green Grand Prize encouraged friendly rivalries between schools and units by offering bonus funds for the highest number of gifts on Give Green. Tulane Athletics, Newcomb Institute and the School of Professional Advancement each won an extra $5,000 because they received the highest number of gifts in their respective categories. Tulane Law School, the School of Liberal Arts and the Tulane University Marching Band won $2,000 each. The A. B. Freeman School of Business, the School of Science and Engineering and the Division of Student Affairs each received a bonus $1,000.

New this year was the TAA Clubs Challenge, sponsored by the Tulane Alumni Association, in which clubs of similar size competed for the highest per capita participation. Winner of the Louisiana Club challenge was New Orleans. Puerto Rico captured the small-market club prize, Colorado won the medium-market award, and South Florida received the large-market club recognition. Winning clubs will receive an in-person celebration (when those are allowed).

In two separate contests, anonymous Parents Council members challenged Tulane students and parents to make a gift. When 100 students or parents made a gift, it unlocked $5,000. When 200 gave, it unlocked another $5,000. In total, more than 200 students took up the challenge and nearly 550 parents.

“The generosity of Tulanians on this one day will make an impact all year long. Their support touches every corner of the university, fueling our work and enhancing the Tulane experience,” said Tulane President Michael A. Fitts. “It’s truly inspiring to see this passionate, involved community come together to move the university forward during this special annual event.”