The Tulane University Police Department has increased patrols, hired additional officers and launched other initiatives to enhance public safety on campus and in surrounding neighborhoods. 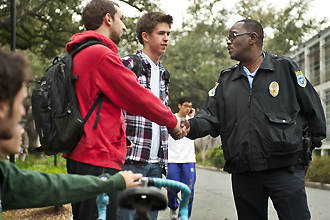 Along with other safety measures, the university is putting more police officers on patrol in areas around campus. (Photo by Paula Burch-Celentano)

The city of New Orleans has given TUPD extended jurisdiction to patrol the uptown area where most students live. This has helped the department implement a comprehensive plan to put more officers on patrol in the areas surrounding campus and work more closely with NOPD in sharing crime information, says superintendent Jon Barnwell.

Officers now wear industry-standard, yellow reflective vests when patrolling on foot or bicycle so that they are easily identifiable. They also have established primary pedestrian corridors for both the uptown and downtown districts to let students know the areas where officers are most often on patrol.

Tulane has worked closely with the city to repair streetlights along these corridors and in other areas surrounding campus to improve visibility at night. So far, more than 70 have been repaired.

Tulane has expanded summer access to its Safe Ride program that offers free rides within a one-mile radius of campus after 6 p.m. and until 2 a.m.

Barnwell is working with students to collaborate on new security measures. He established a safety committee of students and administrators that meets throughout the year to hear concerns and to work together on solutions. One of the committee's suggestions is a GPS-enabled virtual safety escort feature that will be incorporated into the Tulane University mobile app this fall.

“Security is a primary concern at Tulane,” Barnwell says. “It is important that we all work together to keep our campus safe.”