Most Qualified Class Heads to Campus

Tulane University, which less than three years ago sustained more than $650 million in damages and had 70 percent of its campus flooded by Hurricane Katrina, is now more popular than ever. 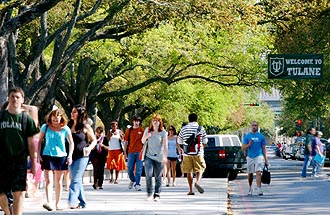 An unprecedented 34,000 high school students applied for fall admission to Tulane. Interest has skyrocketed partly because of the university's strong commitment to community service. (Photo by Paula Burch-Celentano)

Tulane has received deposits reflecting intent to enroll from 1,601 prospective freshmen, surpassing its goal of 1,400 and achieving a major rebuilding milestone years before its most optimistic forecasts had predicted.

This year's figure dwarfs the 882 first-year students Tulane enrolled in the fall of 2006 (the first new class since Katrina) as well as its 2007 first-year class, which numbered 1,324.

"I honestly thought we would not be seeing numbers like this until 2010 at the earliest," Tulane University President Scott Cowen said.

"The number and quality of our incoming class is extraordinary. Students are really attracted to being part of something larger than themselves, the resurrection of a great American city."

The large number of students planning to enroll caps a year in which interest in Tulane among high school students was so great Tulane's Office of Undergraduate Admission purposely shut down its online application page and stopped receiving applications after the number exceeded an unprecedented 34,000 by January.

"Basically we were up 100 percent in applications," said Earl Retif, Tulane's vice president of enrollment management.

The 1,601 students in the class of 2012 are also the most academically accomplished Tulane class ever, based on their SAT/ACT scores and class rank.

Officials credit the increased interest in Tulane to several factors including a universitywide Renewal Plan enacted after Hurricane Katrina that made public service a requirement of graduation. Tulane was also named one the "Hottest Schools in America" by Newsweek magazine in 2007, the second time it got that recognition in the last six years. The Boston Globe also recently published an article on Tulane's renaissance.

Cowen added, "The biggest single factor attracting new students was, without a doubt, the unique opportunity of going to school in a city where they can make a difference. By infusing public service into the curriculum we offer each student an opportunity to apply what he or she has learned in class to real life."