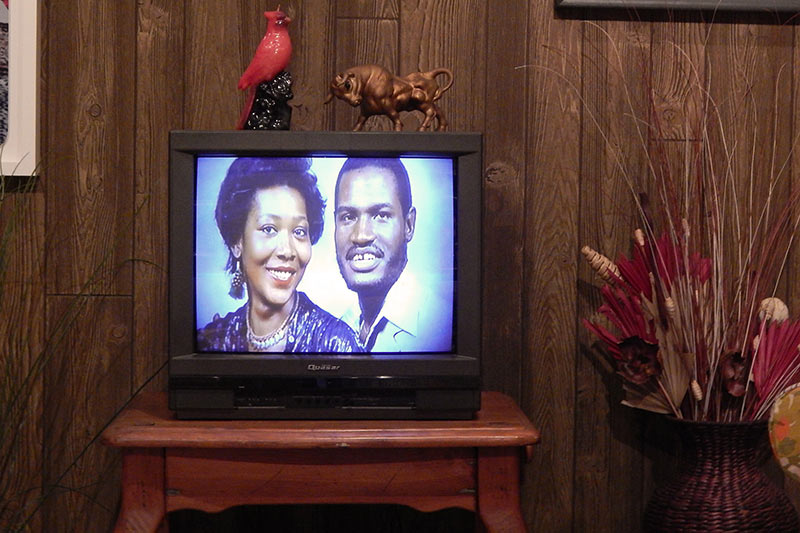 A television inside the exhibit "Mickalene Thomas: Waiting on Prime-Time Star" plays “Happy Birthday to a Beautiful Woman,” one of the films being shown during this week’s film series. (Photo by Madison Cook)

Internationally acclaimed artist Mickalene Thomas, whose exhibit is currently on view at the Newcomb Art Museum on the uptown campus of Tulane University, draws inspiration from diverse sources, past and present. Paintings by French impressionist Claude Monet, the songs of American pop star Whitney Houston, and the words of antebellum activist Sojourner Truth all find expression in her works.

Beginning Tuesday, Feb. 7, the Newcomb Art Museum will present a free five-week film series showcasing the movies that have shaped Thomas’ practice. They will be shown in conjunction with the museum’s Mickalene Thomas: Waiting on Prime-Time Star.

“Not only were several of these films chosen by the artist as a continuation of her work, but they are all important in the history of cinema,” said Newcomb Art Museum public engagement coordinator Tom Friel.

“Not only were several of these films chosen by the artist as a continuation of her work, but they are all important in the history of cinema.”

The series begins on Feb. 7 with Sweet Sweetback’s Baadasssss Song (1971), a groundbreaking work that ushered in a wave of “blaxploitation” films responding to a lack of African American heroes on celluloid.

Cleopatra Jones (1973), notable for its female protagonist, will be screened on Feb. 15.  The movie stars Tamara Dobson as a federal super-agent alongside Shelley Winters, Esther Rolle, and Bernie Casey. Badass Supermama (1996), a 16-minute short questioning adolescent notions of beauty, will immediately precede the feature-length movie.

On March 12, two films will be presented. Black Girl (1966), directed by the father of African cinema Ousmane Sembène, explores the legacy of colonialism through the story of a Senegalese woman who moves to France. Happy Birthday to a Beautiful Woman (2012) is Mickalene Thomas’ directorial debut film about her mother and muse, Sandra Bush.

The series concludes on March 15 with Killer of Sheep (1977), named as one of the “100 Essential Films” of all time, about the Los Angeles neighborhood of Watts.

All films will be shown in the Woldenberg Art Center’s Freeman Auditorium and are free and open to the public. Sweet Sweetback’s Baadasssss Song, Cleopatra Jones, and Killer of Sheep will be screened at 7:30 p.m. Black Girl and Happy Birthday to a Beautiful Woman will be shown at 1:30 p.m.