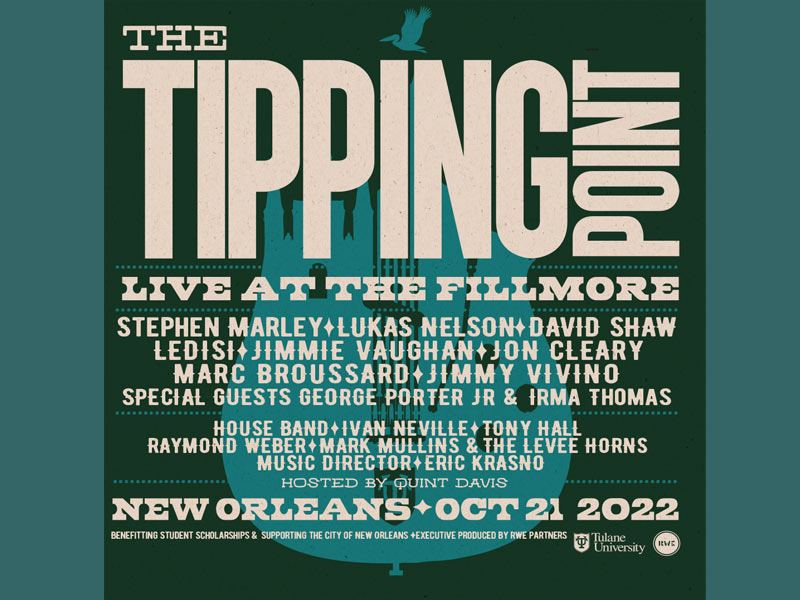 The Tipping Point, an annual benefit concert with an all-star musical lineup, supports Tulane University scholarship programs. The concert takes place on Oct. 21 at The Fillmore.

The sixth annual Tipping Point all-star benefit concert presented by Tulane University and executive produced by RWE Partners (Love Rocks NYC) returns to The Fillmore New Orleans on Oct. 21. Tulane faculty and staff can receive a $50 discount on up to two general admission tickets for this spectacular event by using promo code 50STAFF.

Tipping Point 2022 welcomes eight-time Grammy Award winner Stephen Marley, son of Bob Marley, and Lukas Nelson (Neil Young, Willie Nelson, Lady Gaga), son of Willie Nelson, as headlining performers. Nelson might be best known for his work on Bradley Cooper’s “A Star Is Born,” for which Nelson co-wrote songs with Lady Gaga and co-produced the music for the film, winning a BAFTA Award for Best Original Music and a Grammy Award for Best Compilation Soundtrack for Visual Media. Legendary New Orleans-based festival producer and director Quint Davis will once again be Tipping Point’s host. The CEO of Festival Productions, Inc., Davis is best known as the producer of the New Orleans Jazz & Heritage Festival since its start in 1970. Previously, Davis attended Tulane before embarking on his career in the music industry.

The only concert series of this magnitude in the country that supports a university, the highly anticipated show benefits student scholarships and supports the city of New Orleans.

“Greg, Nicole, and their team have created a musical highlight here in New Orleans for Tulane University and the local music community,” said Davis. “It has taken its place as one of our annual fundraising and unique cultural events.”

“Only in New Orleans would you find a concert of this wonderful and funky quality dedicated to supporting student scholarship,” said Walter Isaacson, bestselling biographer, emeritus board member and the Leonard A. Lauder Professor of American History and Values in Tulane’s School of Liberal Arts and formerly the chairman and CEO of CNN, editor of TIME magazine and CEO of the Aspen Institute (where he is now a Distinguished Fellow).

Proceeds from Tipping Point will fund scholarships that will enable qualified students to attend Tulane University regardless of their economic background. In addition, the concert will energize and engage the New Orleans community. “This amazing night will feature some of the best local and national musicians performing in support of the best and brightest local and national students as they pursue their dreams at Tulane University,” Tulane President Michael Fitts said.

“Music has always been such an integral part of the culture of New Orleans, and we’re thrilled to bring together this stellar lineup of artists in support of the city and Tulane University,” said Williamson.

To purchase tickets, visit Tippingpoint.Tulane.edu. Tickets can be purchased without transaction fees at The Fillmore New Orleans box office at 6 Canal St. Tulane faculty and staff can receive a $50 discount on up to two general admission tickets by using promo code 50STAFF.