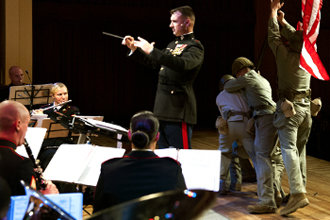 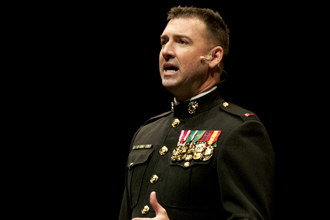 Smith sings a solo of “Some Enchanted Evening” to tell the story of some of the Marines who fell in love with New Zealanders during their duty in the country.

Smith was transferred to New Orleans in 2005 after Hurricane Katrina with the U.S. Marine Corps as the officer in charge of the performing band that is stationed in the city. While here, Smith received a Tulane University degree in musical theater.

This summer, Smith led the Marine Forces Pacific Band, which is one of 10 U.S. Marine Corps bands, in a performance in New Zealand as part of the 70th anniversary celebration of American forces arriving in that country during World War II.

“I wrote a show by combining several different musical selections (some instrumental, some with vocals, some with narrative dialog) that tells the story of the Marines in the Pacific during World War II and the significance of their role in New Zealand,” Smith says.

Smith knows the power of music to celebrate, to rally esprit de corps, to infuse important events with meaning, and to touch lives.

“New Orleans was our duty station, but it became our homes,” says Smith, a chief warrant officer 3. While in the Crescent City, the Marines helped clean up and restore the city's neighborhoods and commissioned a special work of music to give to the residents: “Promising Skies.” The piece by Robert W. Smith (no relation to Michael Smith) debuted in St. Louis Cathedral on the fourth anniversary of the storm.

“It was standing room only in the cathedral, and when the piece was over it received the longest standing ovation I've ever seen, with cheers and tears,” Smith says.

“We think of ourselves as keepers of the American flame â¦ when an audience hears one of our free performances, we want to elevate and re-inspire them, to have them feel good about the place they live and the military.”