They have their own darkened room now, specially outfitted for them and near their custodian, John Verano, in Dinwiddie Hall. The 3,000-year-old Egyptian mummies who have been Tulane residents since 1852 are back in the limelight, with new research under way to try and uncover the mysteries that surround them. 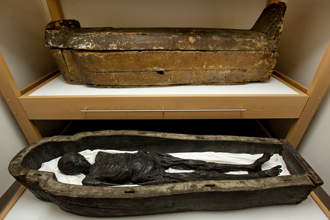 The Tulane mummies, in the university collection since 1852, have a permanent home in the renovated Dinwiddie Hall. (Photos by Paula Burch-Celentano) 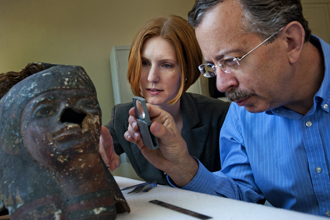 Exactly where are they from? Do their mummy cases and other artifacts in the Tulane collection really belong with them? And will anthropologist Verano and visiting Egyptologist Melinda Nelson-Hurst be able to find out who they really were?

Undoubtedly it's a new chapter in the long lives of the mummies  a male thought to be in his 50s and a teenage girl around 14, who were donated along with their cases to Tulane by antiquities collector George Gliddon some 160 years ago.

Gliddon staged elaborate unwrapping shows that fascinated the public at that time. The female mummy was unwrapped at what is now Gallier Hall in New Orleans before she made her way to Tulane, says Verano, a physical anthropologist and professor whose specialty is South American bioarcheology.

Verano is an expert in human skeletal and mummified remains but not an Egyptologist, which is why he welcomed an unexpected contact from Nelson-Hurst. A new resident of the Crescent City from the University of Pennsylvania, she was “blown away” to discover Tulane's small but mysterious collection.

She is carefully studying hieroglyphs on the coffins for clues as to their origin and is especially interested in a sheet of papyrus discovered wrapped with the male mummy. She thinks he had the title “overseer of artisans” at the Temple of Amun in Thebes, and was named Djed-Thoth-ef-ankh, meaning, “Thoth says that he will live.”

Less is known about the female mummy. “She is better preserved but the biggest mystery,” Nelson-Hurst says. She and Verano hope to produce a scholarly article about the mummies.