Perennial third-party presidential candidate Ralph Nader is back at it again. On Wednesday (Sept. 17) Nader brought his message to Tulane, trying to sway voters away from the ranks of the nation's two traditional political parties. 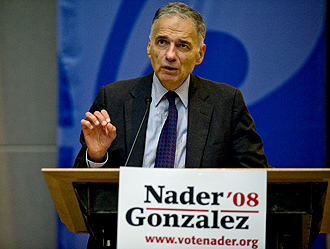 Students and members of the community packed into Freeman Auditorium at the Woldenberg Art Center, sitting in the aisles, on the stage and standing at the back to listen to Nader rail against party politics and the corporate influence that he says dominates the national stage.

“For 63 years, the Republican and Democratic parties have failed to deliver the essential social benefits of a modern economy,” Nader said. “How many more years are we going to give them?”

Clearly focused on students, Nader proffered his specific brand of political polemic, arguing that hope for the country lies with its youth.

“It's your generation that's going to have to deal with the most entrenched, publicly and corporately institutionalized greed and concentrated power in the history of our country,” Nader said. “Corporate crime, corporate welfare, corporate power are the central issues of presidential campaigns because ... they destroy democracy.”

The long-time consumer advocate took swipes at both John McCain and Barack Obama, labeling them as corporate candidates.

“You don't see Barack Obama or John McCain talk about corporate crime,” Nader said. “They're basically engaged in the policy of avoidance. They avoid the kind of subjects [we] put directly on the table.” 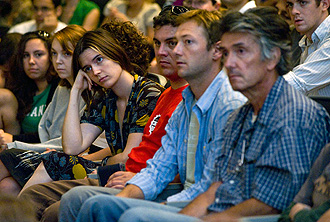 Hundreds of people, from first-year students to older members of the New Orleans community, packed into the auditorium to hear Nader speak.

The Nader campaign announced on Thursday (Sept. 18) that he and running mate Matt Gonzalez would be on the ballot in 45 states as well as the District of Columbia. They will not, however, be allowed to participate in any of the debates scheduled before the November election.

“The debate commission is a company controlled by the two parties,” Nader said. “They don't want anyone else on the stage. Why do we allow rationing of debates in this country? Do we ration weather forecasts? Do we ration entertainment? Do we ration sports?”

Choosing not to ignore the proverbial elephant in the room, Nader dismissed the contention that any votes for him would benefit either the Democrats or the Republicans.

Nader urged audience members to use their votes to send a message and refuse to be “blackmailed” by the least-worst party. He paraphrased labor leader Eugene Debs in his call to action.