Tulane University has been awarded a $14.9 million, five-year grant as a participant in the National Institutes of Health's comprehensive study on the interaction of genes and the environment on children's health. Tulane researchers participating in this national study will investigate factors influencing the development of such conditions as autism, cerebral palsy, learning disabilities, birth defects, diabetes, asthma and obesity. 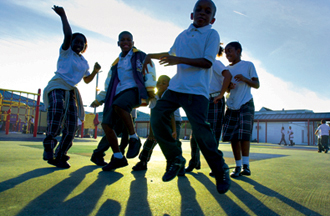 The five-year grant will investigate wide-ranging factors that may impact the health of children. New Orleans is one of 105 study locations throughout the country. (Photo by Paula Burch-Celentano)

In an Oct. 3 announcement, the NIH named Tulane one of 36 study centers around the country. The study will follow a national sample of 100,000 children from before birth through age 21. Study volunteers will be recruited throughout the United States, from rural, urban and suburban areas, from all income and educational levels, and from all racial groups.

When it is fully operational, the National Children's Study is expected to include from 36 to 50 centers in 105 study locations throughout the United States.

Beginning in 2010, Tulane researchers and their collaborators will recruit 1,000 women from Orleans Parish, according to White.

The study will examine a very wide spectrum of factors that may impact children's health. Researchers will begin collecting data during clinical visits by pregnant mothers, with data collection continuing with children's visits to pediatricians. Visits and data collection will continue with this group until each child is 21.

The massive NIH study is expected to yield health information throughout its 25-year span. Within just a few years, it is hoped the study will provide information on disorders of pregnancy and birth. Since women will be recruited before they give birth, and in some instances even before they become pregnant, the study will provide insight into the causes and contributors of preterm birth.

“This study will provide an incredible source of data to understand why some children do better than others,” says Pierre M. Buekens, dean of the School of Public Health and Tropical Medicine. “Having this in New Orleans, which is an area with a lot of health issues, will provide new information about risk factors, the impact of the environment on health and the impact of social factors on health.”

Additional information about the National Children's Study is available at http://www.nationalchildrensstudy.gov.