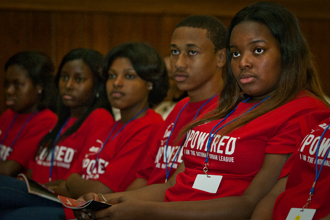 A group of more than 400 high school students gathered on Tuesday (July 24) in McAlister Auditorium where they were welcomed by National Urban League CEO and president Marc Morial, former mayor of New Orleans. The president of the local Urban League chapter, Nolan Rollins, also greeted them. 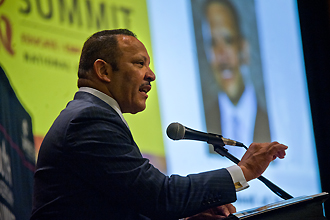 Robyn Ince, senior director of education and youth development for the National Urban League, explained that students attending the weeklong summit on the Tulane campus, which runs concurrent with the main conference, are involved in the league's youth programs.

“The students here are part of Project Ready, which provides academic and social support in preparation for postsecondary success,” said Ince. “We have students present from as far away as San Diego and as close as New Orleans.”

Members of the New Orleans chapter of Project Ready had the privilege of playing host to their peers by welcoming them to the city and participating in the development of this week's schedule.

To add a bit of New Orleans culture to the experience, the youth steering committee included New Orleansâ“style meals prepared by the chefs at Bruff Commons dining hall, Mardi Gras beads in the welcome packets and entertainment by a local high school marching band.