The Tulane Museum of Natural History received a grant of nearly $1.2 million from the National Science Foundation to redesign a leading computer program it developed to help researchers around the world catalog natural history collections. 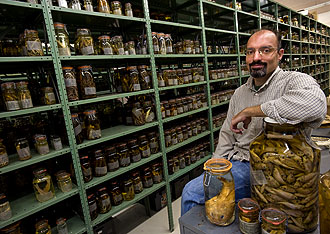 "Our computer program now has a flexible architecture that can be modified to support virtually any language," says Nelson Rios, manager of collections and informatics at the Tulane Museum of Natural History. (Photo by Paula Burch-Celentano)

The program, known as GEOLocate, was developed in 2003 by Nelson Rios, manager of collections and informatics at the Museum of Natural History, located in Belle Chasse, La. The GEOLocate program is now used by 800 researchers and institutions worldwide and is considered a critical tool for computerizing data on natural history collections.

"This is our fourth grant from the National Science Foundation and our fifth grant overall for GEOLocate," Rios says. "This grant revolves around a complete redesign of the program based on Web services, online mapping and integration with other natural history software applications."

A computer programming and database expert, as well as a biologist, Rios developed the program as an aid for institutions as they began scanning text labels from older collections and placing them in computer databases. While the text labels included the state, county and general area where a specimen was found, they left out specific longitude and latitude data.

Using GEOLocate, a researcher can input the general label information on where a specimen was found such as "Mississippi River at Hwy. 190 Baton Rouge" and receive the precise longitude and latitude coordinates of its location.

Such information is critical in enabling researchers around the globe to study climate change, species migration, extinction patterns and threats to the animal kingdom, says Hank Bart, director of the Tulane Museum of Natural History.

The funding was provided through American Recovery and Reinvestment Act of 2009, the economic stimulus package enacted by Congress.