For the Tulane University volleyball team, it was a case of “what a difference a year makes.” After getting snubbed for a postseason bid a year ago, the Green Wave learned they will be traveling to Dayton, Ohio, for Tulane's first-ever NCAA Tournament appearance. The NCAA Volleyball Selection Committee announced the tournament pairings on Sunday night (Nov. 30). 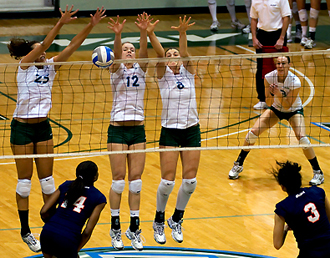 A trio of Green Wave players blocks a shot. Making the play are, from left, Bridget Wells (No. 25), Lindsey Shepard (No. 12) and Vianja Djurdjevic (No. 8). (Photo by Dave Browning)

Tulane put together a 27-5 overall record in 2008, won the Conference USA regular-season championship with a 15-1 league record and guaranteed itself a spot in the NCAA postseason by sweeping three matches last weekend in the C-USA Tournament.

As a result, the NCAA Selection Committee rewarded the Green Wave with the No. 16 national seed and they will take on Tennessee Tech University in the opening round on Friday (Dec. 5), in the Frericks Center.

“It is definitely a plus that we are the No. 16 seed,” Tulane head volleyball coach Liz Kritza said. “A couple of years ago, Tulane volleyball was not being mentioned in the same breath as some of these teams. For us to be a seeded team in this tournament is a really good sign. I also think this is a really good draw. We can fare very well against them if we do what we have done all season, prepare for one match at a time and make sure that we continually improve."

“Every team would love to host, especially us. It has been such a special season for us, but we are not thinking about that anymore. We are thinking about playing Tennessee Tech and putting forth our best version of the team on the floor so that we can be ready.”

Tennessee Tech is 19-12 so far in 2008 and earned its postseason bid by winning the Ohio Valley Conference Tournament with a 3-2 win over Murray State University on Nov. 22. The Golden Eagles shared the Ohio Valley Conference regular-season crown with Morehead State University with identical 14-4 conference records. Tulane is 2-0 all-time against Tennessee Tech, but the two teams have not met since Oct. 12, 1978.

Joining Tulane and Tennessee Tech in the Frericks Center are host University of Dayton and Western Michigan University, who both earned at-large bids to the NCAA Tournament. The Broncos and host Flyers will play each other in the first round and the winner of that contest will play the victor of the Tulane/Tennessee Tech match on Saturday (Dec. 6). Times for all three matches are yet to be determined.

The NCAA Volleyball Championships will be held in Omaha, Neb., Dec. 18â“20.