Kenneth Schwartz, a renowned architect, urban designer and professor at the University of Virginia, will become the new dean of the Tulane School of Architecture effective July 1. 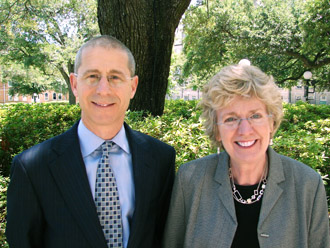 Heading to the Tulane School of Architecture are Kenneth Schwartz, left, and his wife, Judith Kinnard. Schwartz is the new dean of the school and Kinnard will join the faculty. (Photo by Kathryn Hobgood)

His appointment was announced by Tulane President Scott Cowen, who said the national search “has ended in a resounding success.”

A graduate of Cornell University, Schwartz's academic focus is architectural design, urbanism and professional ethics. He began his academic career at Cornell in 1974.

He arrived at the University of Virginia in 1984 after teaching for several years at Cornell and Syracuse University, including a year with Syracuse's architecture program in Florence, Italy. He also served as a visiting professor at Princeton University from 1986 to 1987.

At the University of Virginia, Schwartz has held several administrative positions including graduate program director, department chair and associate dean.

In 2005â“2008, he served as a leader of the Faculty Senate, including a year as chair and committee member on the Board of Visitors, the university's governing body.

In 2003, he was awarded the University of Virginia's Alumni Association Distinguished Professor Award, the school's highest universitywide teaching honor. He was elected to the fellowship of the American Institute of Architects in 2001.

Schwartz also has gained renown as an architect and urban designer. His work with Schwartz-Kinnard, Architects, a company he formed with his wife, Judith Kinnard, who will also join Tulane's faculty, won four national design competitions focusing on the constructive contribution of strategic urbanism and contextual innovation in rebuilding cities.

In 2005, Schwartz and Kinnard opened Community Planning and Design (CP+D), and they subsequently included University of Virginia colleague Maurice Cox as a partner with the firm. Schwartz also founded the Design Resources Center, a not-for-profit organization serving lower income neighborhoods in Charlottesville, Va.

He has completed numerous planning and design projects for communities throughout the Eastern seaboard including his collaboration on the master plan for Crozet, Va., which won a Charter Award from the Congress for the New Urbanism.

In making the announcement of Schwartz's appointment, Cowen thanked Scott Bernhard, a faculty member of Tulane's School of Architecture for more than 15 years, for serving as interim dean of the school since May 2007.