New hope for a new generation 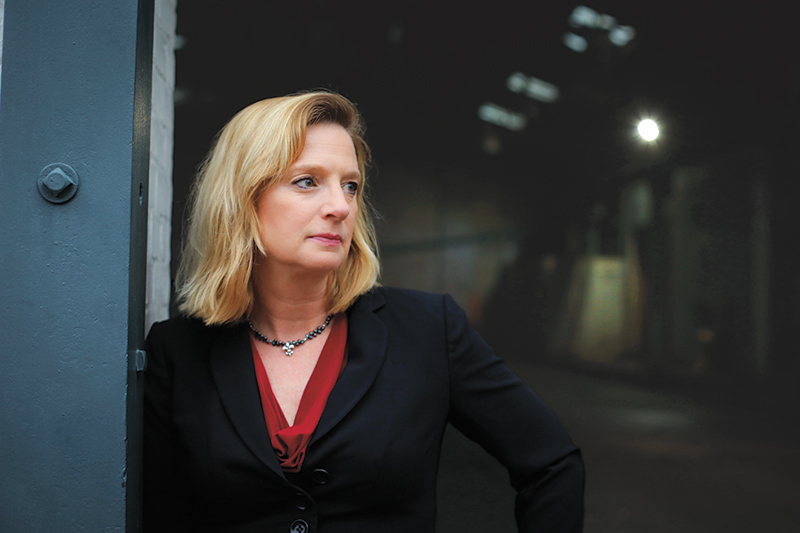 Are the clues to reducing community problems like poverty, bullying and crime held at the tip of a chromosome? The hidden relationship among genetics, human behavior and community problems is just one of the topics explored by Tulane University School of Medicine psychiatrist and researcher Stacy Drury, MD, PhD. (Photograph by Jennifer Zdon)

In her cross-disciplinary Behavioral and Neurodevelopmental Genetics Laboratory, Stacy Drury, MD, PhD, and her colleagues study the relationship between childhood experiences and genetic and epigenetic factors, striving to understand how this shapes a child’s long-term development and health.

Epigenetics is the study of changes in gene expression that are caused by factors that are “above” the genome or the DNA sequence.

Epigenetic markers, in response to environmental events, influence how much, when and where genes are turned “on” or expressed in different tissues and parts of the body.

The School of Medicine, with its close relationships and partnerships across the university, affords Drury an enviable setting for her research initiatives.

“We can integrate genetics and neuroscience and developmental psychology,” said Drury, the Remigio Gonzalez, MD, Endowed Professor of Child Psychiatry, an associate professor of psychiatry, and the vice chair of research in the Department of Pediatrics, “and at that interface we can learn about mechanisms in a way you can’t do in a separate field.”

The broad term “early experiences” that lies at the root of her research envelops trauma and adversity, the same situations of violence and poverty that plague New Orleans communities. Drury’s studies show that traumatic and stressful experiences in childhood — disruptions in home life and a constant diet of seeing or even enduring violence, ongoing poverty and natural disasters like Hurricane Katrina may alter the very DNA sitting on the tips of chromosomes. Moreover, the impact of traumatic experiences appears to cross generational lines, raising the risk of chronic conditions and diseases later in life.

People, particularly children who have been exposed to high levels of community violence, not only have higher levels of “externalizing behaviors” such as aggression or oppositional behavior, but also show changes in their biological markers of stress, including differences in the endocrine and cellular stress pathways. The pathways are linked to later mental illness and also contribute to obesity, cardiovascular disease, diabetes — all public health threats that are to some degree preventable.

“These same stress-response systems that are relevant for socioemotional function and behavior and mental illness underlie [biological] health outcomes as well,” Drury said. “Rates of obesity are directly related to child maltreatment history. Increased rates of cardiovascular disease are seen in people who have been exposed to violence.”

When Trauma Is a Way of Life
Trauma can be defined as a situation that threatens an individual or their loved one’s life or well-being. Adversity is that combination of life events that challenge an individual’s healthy development.

“Exposure to trauma is incredibly common,” Drury continued. “We have to remember that this is not something that happens to ‘that kid over there.’ These kinds of experiences happen, particularly in our community here in New Orleans, to a lot of kids.”

Unfortunately, experiences of both adversity and trauma are rarely isolated.

Nonetheless, traumas do have defined impacts and risks, and some researchers have attempted to disentangle certain types of trauma or adversity from others.

“Our work … is saying [these experiences] don’t happen independently, so how do we capture as much as possible of the cumulative exposure? There’s no kid that’s going to have just one exposure. There are kids who are going to have lots of different kinds of exposures.”

Part of Drury’s ongoing research centers around the telomere, a genetic element that neatly caps off a chromosome and also serves as a marker of a cell’s life span. As cells grow and divide, their telomeres shrink. Eventually the shortened telomere more or less “instructs” the cell to stop growing, a state called senescence. In humans, shortened telomeres or prematurely short telomeres are linked with aging and higher risk of chronic disease and death.

In her study “The Association of Telomere Length With Family Violence and Disruption” (Pediatrics, June 2014), children ages 5 to 15 who were exposed to greater family violence and disruption of the family system through incarceration had shorter telomeres than children who were less exposed.

“These findings suggest that the family ecology may be an important target for interventions to reduce the biological impact of adversity in the lives of children,” she wrote.

If trauma and adversity are common in some American communities, then the push for resilience may be the byproduct. To raise a resilient child, some parenting experts advise, is to raise a successful child.

“I absolutely believe we need to help kids develop resilience and to develop grit, but to do that we have to understand what these [traumatic] experiences are doing to a child,” Drury said, “and what kind of other experiences are protective and build sort of a bubble wrap around them.”

In 2017, Drury published a paper with Sarah Gray in the School of Science and Engineering and Katherine Theall in the School of Public Health, in which they determined that a mother’s stressful experiences — even before she is pregnant — have significant effects on her unborn child’s developing stress response systems. “Thinking Across Generations: Unique Contributions of Maternal Early Life and Prenatal Stress to Infant Physiology” (Journal of the American Academy of Child and Adolescent Psychiatry (JAACAP), September 2017) showed that maternal early adverse experiences as well as prenatal stress leave imprints on an infant’s respiratory sinus arrhythmia, a marker of the balance between the sympathetic and parasympathetic nervous systems that is related to not only socioemotional development but also cardiovascular disease.

For that publication, the American Academy of Child and Adolescent Psychiatry awarded Drury the 2018 Norbert and Charlotte Rieger Award for Outstanding Scientific Achievement, which recognizes the most significant paper published in JAACAP by a child and adolescent psychiatrist within the last year.

From Science to Society
The process of using science to create better communities can be long and difficult.

Theall, a social epidemiologist, holder of the Cecile Usdin Professorship in Women’s Health and director of the Mary Amelia Women’s Center, is Drury’s frequent collaborator on birth equity and maternal mortality issues. Theall emphasized that the interdisciplinarity — “attacking questions from multiple angles” — moves the needle in terms of getting things done.

“I’ve done neighborhood work for years,” she said. “We’ve linked neighborhood conditions to every health outcome, behavioral outcome you can imagine. The minute I started linking it with Stacy down to the cellular, epigenetic level, we started getting more attention. We’re not going to change telomeres probably as much as we’d like to, but we can change neighborhoods.”

Gray, another of Drury’s collaborators and co-authors, and an assistant professor of psychology in the School of Science and Engineering, agreed.

“We’re all driven to ask the same basic question: How does toxic stress — whether it’s quantified biologically, psychologically, socially or structurally — impact health and mental health across generations, and how do we lessen its burden for children and families? This is a big question, and it needs as much creativity and collective action as we can muster.”

Drury has helped develop and teach classes outside the School of Medicine — so that young scientists can quickly learn to ask questions across disciplines. This includes one of three 360-degree classes at Newcomb-Tulane College that tackle important questions with a transdisciplinary perspective. These conversations can start anywhere, though.

“The Brain Institute is another example,” said Drury, who is the associate director of that unit, that shows “how we can … integrate basic scientists, people in biomedical engineering and clinicians to ask better questions and to come up with new solutions … that we wouldn’t have come up with had we not been working with each other across disciplines.”

The question for Drury is, Can we undo or even prevent the biological effects of trauma and stress in children? The answer appears to be yes, but we need much more data.

She is actively examining how much the early caregiving environment can overpower the impacts of toxic stress and intergenerational adversity, specifically targeting mothers who are at greatest risk, including those who are opioid-dependent.

A board member of the Louisiana Commission on Perinatal Care and Prevention of Infant Mortality, Drury is now working to bring science to policymakers, using research to identify opportunities to improve the support for warm and responsive early caregiving, which benefits children and parents.

“If we take people who are about to become parents, who have had lots of exposure to adversity and lots of traumatic experiences, helping them be responsive and sensitive caregivers may be incredibly protective for them as well,” Drury said.

“If we can show that things are happening — cellularly, behaviorally — early in the life course, then we can probably do a lot more in terms of prevention,” Theall added.

Drury was part of a group from the Tulane Violence Prevention Institute that included Stacy Overstreet of the School of Science and Engineering, Dr. Denese Shervington of the School of Medicine, and other faculty members who presented a collection of research on children and traumatic experiences to the New Orleans City Council in July. The City Council then passed a resolution recognizing the importance of trauma-informed systems within New Orleans schools.

“One of the council [members] said, ‘I can’t believe this relates to these things called telomeres,’” Drury said, adding that she suddenly felt hopeful that their research would keep momentum for child advocacy going.

Recently Drury worked with reporters from The Times-Picayune to provide the scientific backbone for “The Children of Central City,” an editorial series that looked at the devastating and cyclical effects of violence on a neighborhood football team over the years, highlighting that the effects are not just behavioral but run deep into a child’s biology.

A Powerful Asset
Drury is eager to mentor new scientists-in-training, develop new studies and find additional funding to support the long-term follow-up of the children already in her study for more than four years, noting that each step forward in her research leads her to ask 10 more questions.

She said she is pleased that her research, especially the JAACAP paper, resonated with scientists and the general public. Drury said she has been contacted by researchers and policymakers worldwide who ask, How can we fix this?

“It had a much broader impact than I anticipated,” she said. “Now I really want to get the next paper out, which is that we think we can correct these transgenerational effects with early caregiving, so that sensitive and secure attachment appears to buffer these negative effects,” Drury said.

Drury said she has benefited from close collaborations with Tulane’s other units, like the schools of Public Health and Tropical Medicine, Science and Engineering, and the National Primate Research Center, building on their research or eliciting their help to land an interdisciplinary grant.

“I think that’s one of the most exciting components of what we do here,” Drury said. “Tulane is unique in that you can talk to all these different fields in one spot, and there aren’t any barriers to it.”

This article appears in the December 2018 issue of Tulanian magazine.

New deans, new directions
From lab to space
From elections to holiday shopping safety, faculty make headlines
From maritime law to marijuana, all in a week’s news
Tulane professor argues for science at Oxford Union