A New Look at Cuba

On Monday, (April 28) the U.S. State Department announced that its diplomats were reaching out to Cuban officials. Earlier in the month, the Obama administration lifted a five-year-old restriction on travel to Cuba for U.S. residents with relatives there. These shifts in policy are just the beginning of improved dealings with the Cuban government, says Ana Lopez, director of the Tulane Cuban and Caribbean Studies Institute. 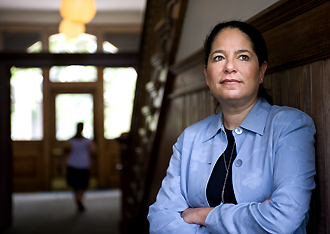 The Obama administration has lifted some restrictions on travel to Cuba, a move that Ana Lopez, director of the Cuban and Caribbean Studies Institute, expects will lead to more significant changes in the future. (Photos by Paula Burch-Celentano)

“The fact that we have done anything to open up relations between the U.S. and Cuba is, in and of itself, a big thing,” says Lopez, who also is associate provost for faculty affairs. “Since the 1960s we have done nothing, with one exception during the Carter administration, but tighten relations. So this is a big departure from prior U.S. practice.”

While Lopez believes the recent actions are good first steps, she doesn't see them as having a major effect on the average Cuban.

“The current [policy shift] is not something that is going to impact a large percentage of the Cuban population,” she says. “It just impacts Cuban American travel and remittances. However, if we see it as the tip of the iceberg, it's gigantic.”

From her standpoint as director of the Cuban and Caribbean Studies Institute, Lopez says she is pleased that, for the first time since 2004, Tulane undergraduate students will be headed to Havana later this year.

“Finally, this fall we will have the first cohort of Tulane undergraduates doing a program in Havana for a semester. It is very exciting, particularly at this time. If things continue in the direction they're moving, our students will be there as changes occur.”

Lopez predicts that travel restrictions will eventually be loosened for all Americans, not just for those with connections to the island.

“There are two bills in the U.S. Congress, one in the House and one in the Senate, specifically asking for the lifting of all restrictions on U.S. travel to Cuba,” Lopez says. “What many of us hope, and what seems to be in the works, is a much broader change in terms of U.S. policy toward Cuba.”

Some Cuban Americans have decried the moves toward thawed relations with Cuba as the U.S. government giving up a hard line just when the Castro regime is close to the breaking point. But Lopez dismisses this argument.

“Cuban Americans have been saying that Cuba is at a breaking point for the last 50 years,” she says. “In the early 1990s  when Cuba was really hurting after the fall of the Soviet Union  Cuba was at the breaking point. It didn't break. What does it take for us to realize that perhaps it's not going to break?”

Lopez suggests that Americans need to look at parallels in U.S. foreign policy toward other communist nations as a road map for dealing with Cuba.

“We trade with China, we trade with Vietnam  countries that are governed in a fashion that is even more anathema to ours. Why should Cuba be any different?” Lopez asks.