Zhiqiang Mao, a physics professor in the Tulane School of Science and Engineering, has received a $450,000 grant from the U. S. Department of Defense meant to enhance research and engineering capabilities in disciplines critical to national security. 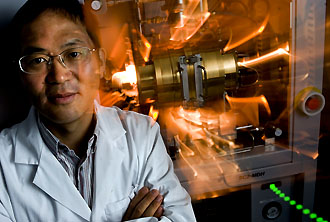 Zhiqiang Mao and his team hope to accomplish a 10-times improvement in detection and 100-fold improvement in noise compared to current state-of-the-art devices such as night-vision goggles. (Photo by Paula Burch-Celentano)

Mao and his team, comprised of fellow Tulane physics faculty members Dae Ho Kim and Ulrike Diebold, along with Leonard Spinu of the University of New Orleans, are developing a new generation of materials for bolometric detection. Bolometric detectors, devices that measure the energy of electromagnetic radiation, have important applications in both the military and civilian sectors. For example, bolometric detectors are used on military devices such as night-vision goggles for navigation and reconnaissance.

Mao says that currently bolometric detectors are mainly based on materials such as silicon and vanadium oxides that limit the sensitivity of the detector. The other major problem with these materials is that they are non-uniform and amorphous, leading to high noise in readings.

"It is imperative to find alternative materials to develop a new generation of bolometric detectors," says Mao. "Our preliminary studies at Tulane have shown that calcium ruthenium oxides are promising candidates."

Mao and his team hope to accomplish a 10-times improvement in detection and 100-fold improvement in noise compared to current state-of-the-art devices.

The award, part of the Defense Experimental Program to Stimulate Competitive Research, is the result of a merit competition conducted for the Department of Defense research and engineering directorate. The Army Research Office, the Office of Naval Research and the Air Force Office of Scientific Research solicited proposals; 28 were selected out of 131 proposals for 2009.