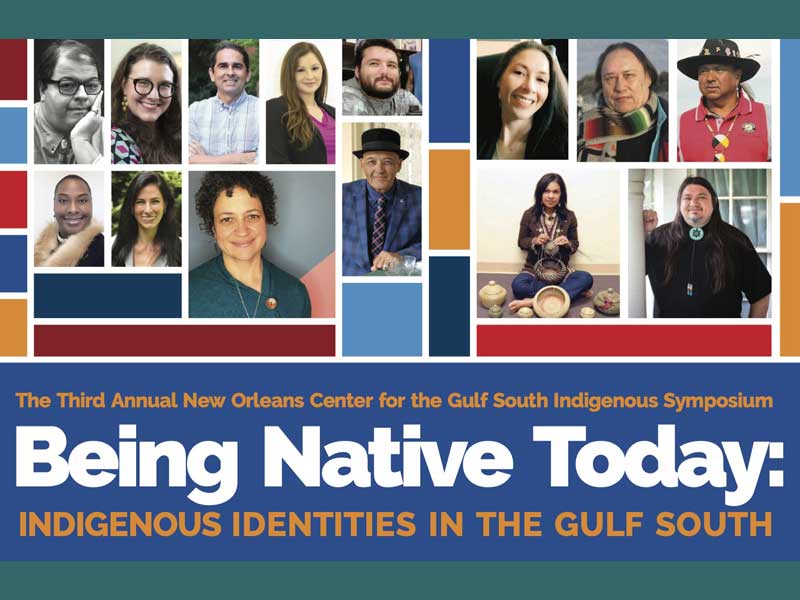 The Third Annual New Orleans Center for the Gulf South Indigenous Symposium will take place on Friday, March 12, from 9 a.m. to 5:30 p.m. via Zoom. This year’s theme is Being Native Today—Indigenous Identities in the Gulf South.

The Third Annual New Orleans Center for the Gulf South Indigenous Symposium will take place after a yearlong postponement this Friday, March 12, from 9 a.m. to 5:30 p.m. via Zoom. This year’s theme, Being Native Today—Indigenous Identities in the Gulf South, addresses how native identity has changed over time. Past years have focused on (de)colonialism and native and French encounters, over 300 years, and land sovereignty. To register, click here.

For many Indigenous peoples, identity has been self-evident and grounded in generations-long relationships to lands, waters and other Indigenous communities. This conference seeks to foster conversations about tribal communities and identity during the colonial to the modern era and factors that shape the lives of the diverse native nations of the Gulf South today.

“The New Orleans Center for the Gulf South organizes this annual symposium with the intention to create an educational setting where native knowledge is shared with and honored at Tulane University, and where our university and diverse national and regional communities learn from the peoples on whose land we now live,” says Clark Executive Director Rebecca Snedeker.

In the 17th and 18th centuries, most people in North America understood native people as part of sovereign, autonomous, Indigenous nations, and native people did not primarily use racial ideologies to talk about their identities. However, the American republic expanded in the early 19th century, and racist policies that promoted expansionist U.S. settler colonialism increasingly impacted and displaced Indigenous people. Federal policy makers endeavored to convert these preexisting, yet “foreign” native nations into racial minorities within the American empire through concepts of blood quantum and scientific racism. Keynote speaker and member of the Lumbee Tribe Dr. Malinda Maynor Lowery will address the Lumbee Tribe and issues related to federal enrollment, racial identity and indigeneity.

For native people who ground their identities in traditional concepts of kinship, U.S. federal frameworks have created many challenges, and they have also led to the development of two largely separate conversations about Indigenous identities among native and non-Indigenous people. In the wake of these exclusionary and discriminatory 20th-century policies, tribal nations also began to reevaluate their criteria as to who belongs and who does not belong in their nations. The centrality of race, blood and biology in federal policy has also shaped how some native people identify who belongs, and these inclusionary/exclusionary theories have served to preserve culture as much as alienate and reproduce white supremacy. This conference aims to bridge these conversations and to highlight the less well-known perspectives of Indigenous scholars, artists and community members on these issues.

Through dialogues with different members of tribal nations, storytelling, poetry and music, the Third Annual New Orleans Center for the Gulf South Indigenous Symposium seeks to address these dynamic components of Indigenous identity and open a conversation about the variety of ways in which diverse native peoples understand what it means to be Indigenous today.

This event is hosted by New Orleans Center for the Gulf South. Co-sponsors include the School of Liberal Arts, The Murphy Institute, WWNO, the Department of Anthropology and Center for Public Service.