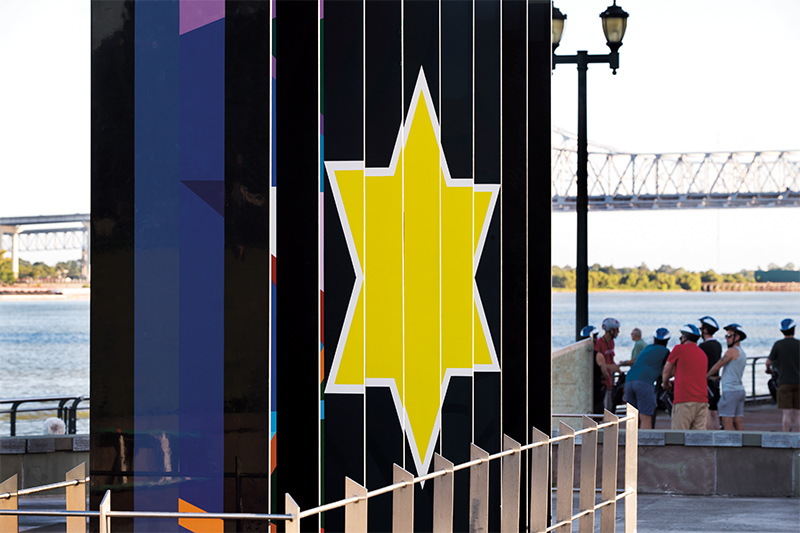 Jews in New Orleans have shaped the commerce, culture and philanthropy of the city during nearly the entirety of its 300 years of existence. (Photo by Paula Burch-Celentano)

This story was originally published in the December 2017 issue of Tulane magazine.

Cathy Cahn Kahn Kahn had a banner year in 2017. Born Cathy Cahn and married for many years to the late Fred Kahn, at age 87, she married an old friend, 92-year-old Charlie Kahn (E ’45) and finished her work on the archives of the Jewish community of Greater New Orleans.

“We live on any block in the city. We are part and parcel of New Orleans.”

The records are a treasure trove of stories about Jewish lives that have contributed and continue to enrich the culture of New Orleans.

Since the mid-1700s, Jews have fundamentally shaped New Orleans. The city wouldn’t be the same without its Jewish community, says Kahn, who co-wrote Images of America: The Jewish Community of New Orleans. “We have assimilated into the general New Orleans community. We live on any block in the city. We are part and parcel of New Orleans.”

To Kahn, one word that boils down the Jewish community—like a restorative bowl of matzo ball soup—is connections.

A hallmark of the Jewish community’s impact on the city has always been its philanthropy, with Jewish individuals and collective groups funding the arts (notably the New Orleans Museum of Art), health care (the likes of Touro Infirmary), education (from preschools and primary schools to Delgado Community College and Tulane University), and religious institutions (such as Touro Synagogue).

“What makes our funds available is that from the beginning we were excluded from pouring out hundreds of thousands of dollars every year on Carnival and debutante debuts,” Kahn says. Her father used to call the coterie of well-to-do and liberal-minded women who got things done in the city “Pinks in minks.” Now, the Carnival groups Krewe du Jieux and Krewe of Meshuganah goodheartedly satirize the traditional krewes. Only in New Orleans would you find Jews who celebrate both Mardi Gras and Purim with gusto.

Jews formed the bedrock of the business community of New Orleans and are among the leading Crescent City entrepreneurs of today.

Among the hoards of archives that Kahn organized were 35 linear feet of records from the Jewish Children’s Home (1855–1981), which was founded after a series of yellow fever epidemics demonstrated the need to support destitute women and children.

Sidney Pulitzer’s father and uncles grew up in the Children’s Home and later founded the Wembley Tie Co. in New Orleans. The family struggled through the Depression and was in “the most difficult business you could ever imagine” because of ever-changing fashion, Pulitzer says. “Uncle Morris used to say, ‘We were so poor, we didn’t know the difference.’”

Sam Pulitzer, Sidney’s father, got the idea for an exclusive, wrinkle-free tie fabric when he cut a tie from a beautiful brown suit owned by his fashionable brother, Emanuel Pulitzer. The fabric looked like silk but was actually mohair.

“It became the tie to wear because it didn’t wrinkle. In five years, sales went from $350,000 to $4.2 million,” says Pulitzer, who was president, CEO and chair of the Wembley board from the 1970s until 1997. In its heyday, Wembley (later renamed Wemco) had 22 percent market share, and the company sold for $63 million.

This coming spring, Pulitzer will teach his course on entrepreneurism for the 22nd year at the A. B. Freeman School of Business at Tulane. Pulitzer wrote the textbook for the course Big Money 101: Management and Investment Success. The main message he drives home to students is the value of free enterprise and the entrepreneurial spirit, which he fears is dying out.

Pulitzer relates a story his father loved to tell about a luncheon meeting of a dozen or so local business leaders that was convened by Edith Rosenwald Stern, the Sears heiress who moved to the Crescent City after marrying New Orleans native Edgar Stern Sr. (A&S ’06). Trying to raise money for the Jewish Children’s Home, she personally pledged a large sum, perhaps $250,000, then Stern went around the table asking each business leader for a pledge. “Dad didn’t know why he was invited, but when it was his turn, he pledged $15,000. He nervously told Uncle Manuel what he had done, but Manuel was laid back. He said, ‘Don’t worry, Sam, we’ll figure it out,’ and they did.”

When the largest ready-to-wear store in Atlanta got wind of the story, the establishment signed on to do business with the Pulitzer family.

“My grandmother was willful, and she came from a willful group,” says Hess of Stern, whom he describes as “very smart, committed to civil rights and social justice, and progressive.”

She invited her grandchildren, once they were 18, to sit on the board of the Stern Family Fund to learn how to distribute funds for the “wellbeing of mankind,” as her father intended.

Edgar Stern, like the Pulitzers and so many other Jews, was in the family business. Lehman, Stern and Co. were cotton merchants (1880–1940). The cotton trade was instrumental to the burgeoning New Orleans economy and to building the Jewish community, says Michael Cohen, associate professor and chair of the Tulane Jewish Studies Department. New York University Press published Cohen’s book, Cotton Capitalists: American Jewish Entrepreneurship in the Reconstruction Era, in December. In the 19th century, cotton was the foremost commodity in the United States, and the port city of New Orleans was pivotal.

“The South was the most important cotton land in the world,” Cohen explains. “Until the mid-19th century, cotton came down the Mississippi River to New Orleans and then out to the world. Jews played an important role in financing and marketing the cotton industry. In a period when business is predicated on trust, ethnicity or Jewishness becomes key.”

The significance of this extensive network of Jewish enterprise has been underappreciated, Cohen contends.

Likewise, a comprehensive history of New Orleans Jewry has not been explored since the late 1960s. Cohen is working to develop a three-day colloquium that the Jewish Studies Department will host with “the best historians who can contextualize the Jewish experience in new ways” and will culminate with an edited volume documenting the contributions of Jews in the region.

Besides the contributions to the commerce of the city, Jews also played, and continue to play, a pivotal role in the civic life of New Orleans. David Goldstein, rabbi emeritus of Touro Synagogue, has taught Jewish studies at Tulane since he arrived in New Orleans in 1978. He is particularly proud of the New Orleans Jewish community for its long history of social justice and human rights work, as well as interfaith activities and strong collaborations with the African-American community. Goldstein and his wife, Shannie, led an advocacy effort in the 1980s on behalf of Soviet Jews who were oppressed and seeking asylum.

“In the 40 years that I’ve been here in New Orleans, what have I seen?” Goldstein asks. “A nucleus of civic-minded Jews in every quarter—City Council, judges, leaders of civic organizations, philanthropists ... Jews here are disproportionate in terms of the deeds we do and our philosophy. The Jews have never seen themselves as the center of activity, but rather as part of the larger community, and that’s what distinguishes them.”

The Jewish Studies Department, Chabad and Hillel help nourish the next generation of Jewish leaders. According to the first-ever college guide touted by The Forward, a monthly magazine published for a Jewish American audience, Tulane University ranked in the top 10 best colleges for Jewish students in the country (No. 6) this year.

Tulane Hillel engages nearly 92 percent of Jewish undergraduates in a typical year and, remarkably, about 35 percent of all non-Jewish students at Tulane. Tulane Jewish Leaders, a group of about 350 undergraduates, is mentored by the Hillel professional team. This past year the leadership group developed 112 programs that engaged over 4,600 students and community members.

From her first year at Tulane, Eden Saltzman was active in Hillel. Connections are important to her, she says, and Hillel gave her a sense of home and “Jewish geography.” At a Jewish Leaders dine-around, Saltzman met Ben Swig (PHTM ’09, MBA ’16), co-founder of Ready Responders, a company that won the Big Idea competition during New Orleans Entrepreneur Week this year. Ready Responders will utilize a mobile app and GPS technology to rapidly deploy members of a network of part-time EMTs, paramedics and healthcare professionals to respond to the city’s 911 calls. It will utilize telehealth technology to reduce costly ambulance transfers to emergency departments when possible.

Saltzman graduated with a bachelor’s degree in public health and international development in May 2017 and now has landed a job with Ready Responders. “I’m pumped,” she says. “This is public health, entrepreneurship, creativity ... I’ve found a job that I’m passionate about.”

Saltzman exemplifies the type of student that Tulane, one of the country’s best schools for Jews, attracts. She is part of a new generation that is building upon the foundation laid by the city’s older generations of Jews who found a home among the rich gumbo of ethnicities crowding this crescent slice of land in the heart of the American South. Like her forebearers she is falling in love. A Cleveland native, Saltzman always wears a small silver fleur-de-lis ring, a symbol of the city’s culture and community that she cherishes. She calls herself “a New Orleanian in progress.”

Fran Simon is a graduate student in the Master of Liberal Arts program in the Tulane School of Professional Advancement.