It is a rare occasion when a program entering its 34th varsity season uses the term "new" to describe itself. 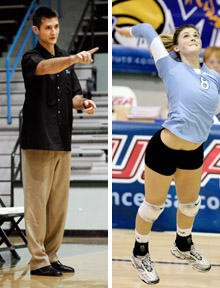 For the 2009 Tulane University volleyball team, however, that is precisely the case as the Green Wave has a new coaching staff led by head coach Sinisa Momic, veterans playing new roles, five new student-athletes and a new system to go along with a brand-new attitude.

One year after winning the Conference USA regular-season and tournament championships to advance to the NCAA postseason for the first time in school history, the Green Wave return a pair of starters. Sophomore outside hitter Visnja Djurdjevic and junior middle blocker Lindsey Shepard are among seven players from last year's championship team, along with senior libero Jenn Miller and seniors Rachel Lindelow and Ksenija Vlaskovic.

Also back for 2009 are juniors Amaris Genemaras and Stephanie Stromath. Together, they will make the transition to a 5-1 offense after running a two-setter system for the majority of the last three seasons.

"I think they know what they are capable of," Momic says, "but I think they are realistic and know that just because they've done it before doesn't mean they are going to walk through the season and do it again. We have to do everything all over again  rebuild, train, deal with all the problems that come up during the season. Then we have a shot to do it."