A newly released poll suggests that New Orleans residents are unified across racial lines regarding the direction of the city and the challenges facing the next mayor, said political strategist and Tulane faculty member James Carville in a press conference on Thursday (April 23).

The poll, which was conducted by Tulane in conjunction with Carville's non-profit organization Democracy Corps, identifies important issues in the 2010 New Orleans mayoral election.

“I have the data to prove it,” Carville said. “The much-talked-about racial divide in New Orleans is nowhere near as much as most people perceive it. If this election becomes about race, it will be because the politicians took it there, not because the people wanted it there.”

“I am very motivated by the degree of unity in which New Orleanians do things. Not to say we don't have differences, but we are much more alike in many respects than we're led to believe.”

Brian Brox, an assistant professor of political science who helped develop the poll and presented the results alongside Carville, said that New Orleans voters are remarkably informed about issues concerning their city.

“The voters in this city are engaged. They have an extraordinary understanding of current events and are really in touch with what is going on,” Brox said.

In agreeing, Carville added that the results suggest voters recognize the importance of this election as it relates to the continued recovery from Hurricane Katrina. 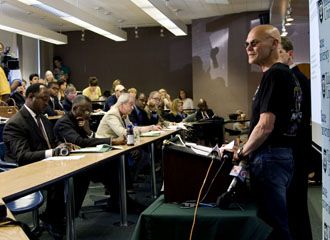 “I am very motivated by the degree of unity in which New Orleanians do things,” said James Carville in a press conference on Thursday (April 23). (Photo by Ryan Rivet)

He added, “The civic pride and the sense of place that exists here is unlike anywhere else in the United States. I think in the end, when you read this poll it makes you proud to be from here. It makes you proud of the people that live here because they're realistic about their problems, but they know what they want to get done.”

Carville, who moved to New Orleans with his family last year, said he considered it a “real privilege” to call the city home but recognized the need for strong leadership.

The poll was developed by faculty members from Tulane's political science department, along with researchers at Democracy Corps and students in Carville's class, “Elections and Campaigns.” Carville made sure to acknowledge the work of his students.

“It really has been an incredible project,” Carville said. “These kids at school, across the board, worked really hard on this project.”

While the survey addressed weighty subjects, it posed a few lighthearted questions, including one that asked respondents to identify their favorite local dish. The answer: gumbo.

“We did a couple of things to have fun,” Carville said, laughing. “We have a very serious election, but we're from New Orleans and we want to have a good time, too.”