Tulane Medical Center's orthopaedic surgeons have decreased the time required for complex operations while increasing the accuracy of surgical incisions since the hospital acquired a robotics-assisted positioning system that produces high-resolution, multidimensional images. 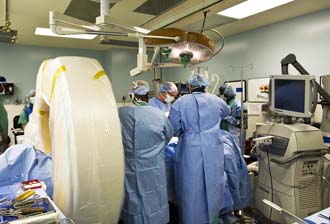 Orthopaedic surgeons at Tulane Medical Center use the new O-arm Imaging System for high-resolution, multidimensional images to guide them during surgery. (Photo by Jeff Johnston)

Tulane is the only Louisiana hospital with an O-arm Imaging System, a mobile CT scanner that produces 3-D images in the operating room.

The images are particularly useful in complex orthopaedic and spinal operations, although they also can be used in neurosurgery.

Dr. James Bennett, professor of orthopaedics and chief of pediatric orthopaedics, has adopted the O-arm technology into his routine procedures for correcting curvature of the spine (scoliosis) in adolescent patients.

Scoliosis is a medical condition commonly occurring or worsening during adolescence and primarily in girls. In scoliosis, the spine forms in the shape of a "C" or an "S" instead of a straight line.

A school nurse diagnosed Skyler Broussard, 11, with scoliosis in March 2008. Her pediatrician in Lafayette, La., where the family lives, referred Skyler to Bennett at the Tulane Hospital for Children. If detected early, scoliosis can be treated by a brace, but Skyler's ribs were already protruding on the right side of her back, so her condition was already too advanced for that treatment. 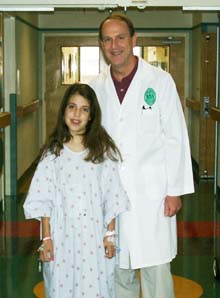 Skyler's mother, Tara Broussard, did a lot of research before coming to Tulane. "It's all happened very fast," she says. "It's been an emotional rollercoaster."

Before surgery, Skyler liked to play soccer and took dance class at school. Though she felt no discomfort, her scoliosis could have worsened and become painful if left untreated. About one in 10,000 children need surgery for scoliosis.

At Tulane Medical Center, Bennett showed Skyler X-rays of her spine and a skeletal model to explain what would happen in surgery.

The procedure called for inserting eight screws into Skyler's spine to hold it in place, stabilizing it and allowing her to play sports and lead a normal life.

Skyler required almost a week in the hospital, although she began walking the day after the operation on May 12. Newly developed instrumentation will keep her spine securely fixed so she can move freely and without pain. Bennett expects her spinal fusion will be complete within six months.

Skyler said she plans to read books during her recovery and is glad to be excused from doing chores. Her younger brother, Dillon, 8, will have to wait on her hand and foot, Tara Broussard said.