The first day of his new job, dressed in a blazer and tie, Charles Lovell walked to work, arriving at the Newcomb Art Gallery on the uptown campus a little sweaty. “I didn't realize how steamy it was going to be,” he says. 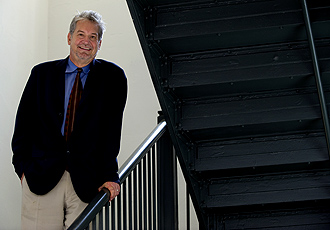 Charles Lovell brings years of experience as a curator, exhibition organizer, fund-raiser, author and editor to his new position as director of the Newcomb Art Gallery. (Photo by Paula Burch-Celentano)

It's understandable that Lovell, the gallery's new director, was unfamiliar with New Orleans' infamous heat and humidity. After all, he comes to Tulane from the Harwood Museum of Art at the University of New Mexicoâ“Taos, where the elevation is 7,000 feet above sea level.

Lovell officially took the helm of the below-sea-level Newcomb Art Gallery on June 27. He says that what convinced him to take the position was the “charismatic and dynamic” gallery staff. “I liked their energy,” he says.

“I think they've done a marvelous job,” he adds.

Lovell plans for the gallery to continue presenting a diversity of art exhibitions appealing to a wide audience. His goal is to “get people to feel like they want to come to the gallery, that it's exciting, and give them reasons to come.”

Next up at the gallery is “Vital Signs,” with an opening reception on Sept. 10. Curated by Gary Sangster, executive director of the Headlands Center for the Arts in Sausalito, Calif., “Vital Signs” is “an examination of traditional drawing and works on paper within the context of new forms of digital production.”

Lovell's priorities in the next few weeks are meeting with gallery supporters in the larger community, getting to know people at the university, working on future exhibition schedules, and handling financial and management details.

At the Harwood Museum, Lovell organized and was co-curator of what is called the most successful exhibition in the museum's 85-year history, “Diebenkorn in New Mexico.” The multiyear project, traveling nationally, focuses on Richard Diebenkorn (1922â“93) “before he got famous,” says Lovell, who wrote the introduction to a book published in conjunction with the exhibition.

Lovell is also the co-editor of Art and Faith in Mexico: The Nineteenth-Century Retablo Tradition.

Lovell and his wife, artist Norah Lovell, made the move to New Orleans because the city “spoke to me  and my wife embraced it,” he says. They are getting acclimated to New Orleans by taking strolls along the levee.

The acclimation process must be working. After the first day's drenching during his walk to work, Lovell says, “It seems like the next couple of times I did it, I fared better. Maybe there's just a little bit of getting used to it.”