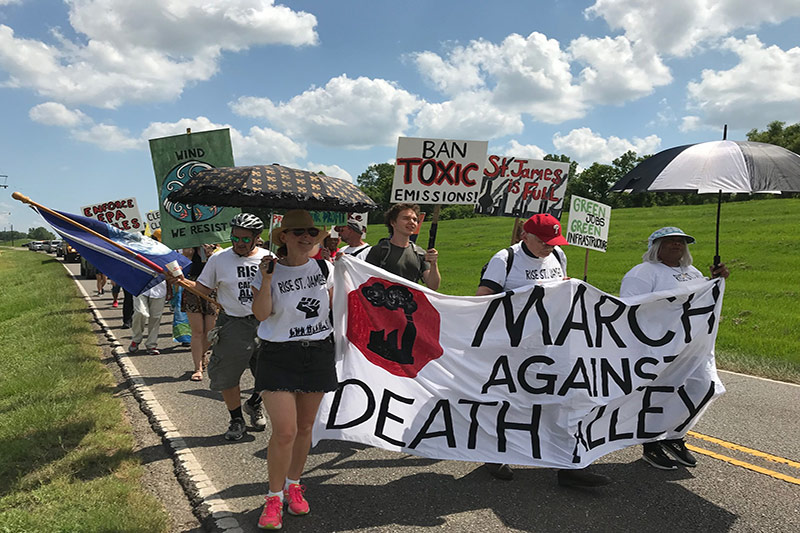 'Women of Cancer Alley,' to be screened in Freeman Auditorium on Oct. 22 at 7 p.m., is the first-ever collection of films made by women who live adjacent to the chemical plants, tank farms, and refineries along the Mississippi River in south Louisiana. (Photo provided by Newcomb Art Museum)

In conjunction with their current fall exhibitions, "Flint is Family" and "The American Dream Denied," which use art, documentary photography, video, and text to raise awareness of marginalized communities affected by environmental pollution, Newcomb Art Museum will host a free screening on Tuesday, Oct. 22 at 7 p.m. in Freeman Auditorium of "Women of Cancer Alley." It is the first-ever collection of films made by women who live adjacent to the chemical plants, tank farms, and refineries along the Mississippi River in south Louisiana.

Cancer Alley is an 85-mile stretch of industrial plants alongside the Mississippi River in Louisiana dotted with towns that have cancer risks almost 50 times the national average and some of the most toxic air in America, according to the Environmental Protection Agency (EPA).

As Anne Rolfes, director of The Louisiana Bucket Brigade, a New Orleans-based nonprofit whose mission is to end petrochemical pollution in the state of Louisiana, says, “50 miles away from Tulane University, some of the biggest corporations on earth are planning to expand and construct petrochemical facilities that would hasten climate change and assure that New Orleans sinks into the ocean. These films are made by women fighting back – fighting to protect us all.”

The seven two-minute films depict the lives, concerns, and activism of eight women working to stop the country’s planned build-out of plastics plants, including a proposed Formosa complex of 14 facilities that will produce single-use plastics and an estimated 26 million tons of greenhouse gases in the already-burdened St. James Parish. According to the films’ description: The communities in St. James and nearby St. John Parish (which has the highest cancer risk in the nation due to unregulated emissions from Denka’s neoprene plant), are ground zero to halt what would be an enormous climate, sustainability, and environmental disaster: the industry’s plans to expand by 35% over the next six years.

The women filmmakers, all black and Louisiana-born, had never written a script or made a film before, creating these films in a workshop led by Berkley, California-based Storycenter. The Louisiana Bucket Brigade organized the film project. The emphasis on the ability for the women to tell their own stories is “the most compelling part of this,” said Rolfes in an interview with Essence.

The film screening will be accompanied by a discussion with Anne Rolfes as well as with Sharon Lavigne, founder and director of RISE St. James, which was created in 2018 to fight environmental injustices in Lavigne’s hometown. The screening and discussion are free and open to all and produced in partnership with The New Orleans Center for the Gulf South and Newcomb Art Museum.