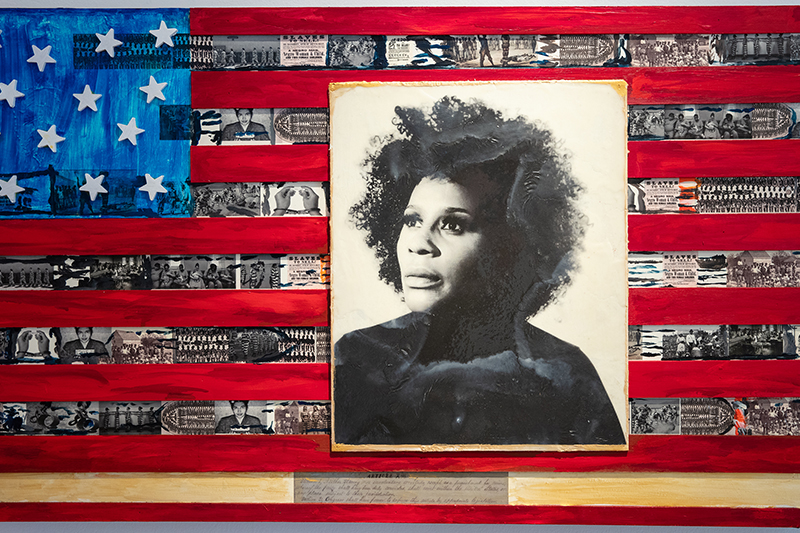 Epaul Julien’s ‘13th,’ (2018), based on the story of PerSister Dolita Wilhike, is on view at Newcomb Art Museum, which will host a panel on prison policy reform on June 8. (Image courtesy of the Newcomb Art Museum)

Women are currently one of the fastest-growing state prison populations – according to the Prison Policy Initiative, the national incarceration rate for women has grown 834% over the last 40 years. Louisiana currently holds the seventh-highest rate of incarcerated women in the world, with a rate of 198 women in prison per 100,000 people in the population.

Newcomb Art Museum’s current exhibition, “Per(Sister),” reveals the human stories behind the statistics through 30 different artworks ­— from sculpture, painting and mixed media to film and music — and works to build awareness of the situations that arise before, during and after incarceration.

Throughout the past six months the museum has hosted panels and programming that addressed the legislation contributing to mass incarceration, the lived experiences of impacted communities, and the use of art as a tool for social justice.

“The program will create a space for imagining a new future, in terms of prison reform policy.”

This Saturday, June 8, at 2 p.m., the museum will present its final panel for the exhibition’s run, “Changemakers” — a conversation highlighting local issues critical to criminal justice reform as discussed by families directly impacted by the system as well as policy experts. The panel takes place in Freeman Auditorium in the Woldenberg Art Center.

Moderated by John Burkhardt, criminal justice reform field director at the Southern Poverty Law Center and organizer for the statewide coalition Louisiana for Prison Alternatives, the panel discussion features Robresha Anderson, co-founder of Daughters Beyond Incarceration; Katie Schwartzmann, legal director of the ACLU of Louisiana; and William Snowden, director of the New Orleans office of the Vera Institute of Justice, as they explore policy measures taken in favor of criminal justice reform.

“The program on Saturday is important because it will create a space for imagining a new future, in terms of prison reform policy, and how that can positively shape the lives of people who are involved with our local justice system,” said Laura Blereau, curator and coordinator of academic programming at the Newcomb Art Museum. “A better understanding of the nuts and bolts for policy reform is certainly needed because Jefferson Parish and Orleans Parish have the highest rates of incarceration in Louisiana.”

The audience is encouraged to take part in an interactive Q&A at the conclusion of the panel to learn more about each of these organizations and what actions they are taking to reduce the incarceration rate for women in Louisiana.

Also on Saturday, Andrea Armstrong, professor of law at Loyola University, will lead an exhibition tour of Per(Sister) at 12 p.m., giving insight to recent Louisiana legislation that affects currently and formerly incarcerated women.

At 1 p.m., before the panel discussion, New Orleans vocalist Michaela A. Harrison will give a one-of-a-kind musical performance in the galleries in response to themes presented in the exhibition, which promises to be a healing and moving force.

All of Saturday’s events, as well as entrance to the museum, are free and open to the public.