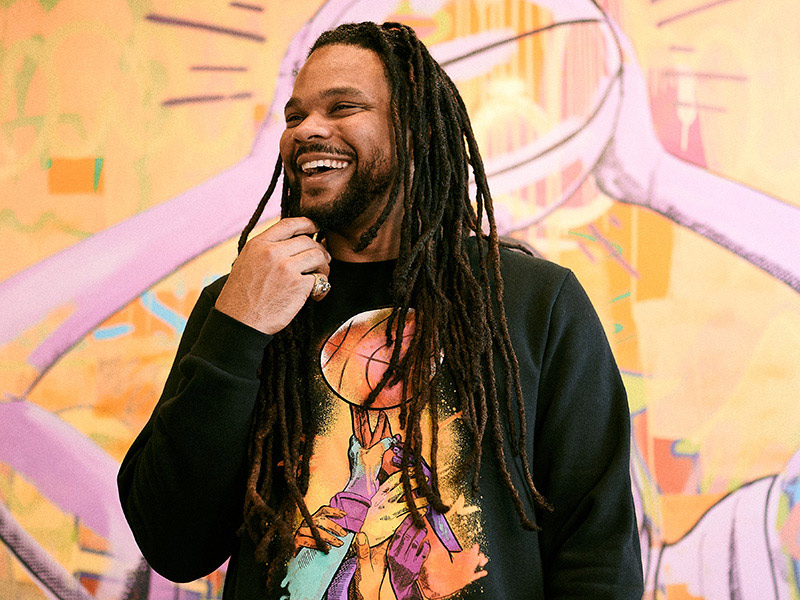 Newcomb Art Museum's upcoming exhibition, 'NOT Supposed 2-Be Here', is the first solo show in a museum setting by artist Brandan “BMike” Odums. The exhibition is set to open Jan. 18, 2020 and run through May 23. (Photo by Jeremy Tauriac, courtesy of Studio Be)

Newcomb Art Museum of Tulane University is pleased to announce its upcoming exhibition, NOT Supposed 2-Be Here, the first solo show in a museum setting by artist Brandan “BMike” Odums. The exhibition is set to open Saturday, Jan. 18 and run through May 23, 2020.

Widely known and celebrated for his post-Katrina art interventions that disrupt public spaces with messages of resilience and resistance, over the past 15 years Odums’ practice has resulted in video art, painting, design, murals, and sculptures that strategically challenge the status quo, using crowd sourced creativity to bring attention to legacies of urban blight, civil rights, family and racial dynamics. Engaging narratives of unsung heroes, fantasy and parody, the New Orleans native’s work skates a line at the edge of pedagogy, street art and pop-culture.

NOT Supposed 2-Be Here, which features brand new site-specific installations, as well as past work, is part retrospective and part futurescape. Addressing the idea of who or what kind of art belongs in a museum, the show explores four different takes on inclusion drawn across notions of art, race, place, and accessibility.

“The way I'm breaking down the title in my brain is layered. It’s a conversation about who am I am speaking about – who is not supposed to be here? The "who" starts with me directly, in terms of me as an artist with the "here" as traditional art spaces,” says Odums. “Another layer is based along racial lines with the "who" being black people and the "here" as this country, and another on place with the "who" being people in this region as a whole and the "here" as the physical space that we share and thinking about the floods that happened in the past, the flooding that's continuing to happen, coastal erosion, and all the elements that inform people to say things like, 'we won't be here in X amount of years.' ”

“The fourth layer and the final question focuses on the fact that now I am here as an artist and I am invited to show work in art museum, is art supposed to be here? It‘s a conversation of where does art live.”

These questions and more are explored throughout Newcomb’s galleries through colossal paintings, sculpture, mixed media, and immersive installations – from one room that reckons with the spiritual impact of Katrina to another room that honors local legends from New Orleans Access Television (NOATV) and pays homage to Odums’ early roots in film and television during his time with 2-Cent Entertainment. Artists and musicians who’ve influenced Odums work are celebrated and reflected in a wall of spray can portraits that work literally and metaphorically because, as Odums says, “cans are used to create, and these are all the people that helped create who I am.”

That thread of questioning who Odums is, and what elements have aided in the creation of his identity and impacted his work, is carried throughout the exhibition where he wrestles with concepts of Black power, the definition of Blackness, and the responsibility of the artist to his audience and community. NOT Supposed 2-Be Here is a chance for audiences to envision and engage with the bold histories – and futures – that Odums’ work encapsulates and explore the alchemy of one of New Orleans’ most prominent, contemporary visual artists.

“It is a tremendous honor for us at Newcomb Art Museum to be able to provide the first museum exhibition to an artist of the caliber and community impact of New Orleans’ own BMike Odums,” says museum director Mónica Ramírez-Montagut. “BMike's work is not only contributing to the field of art from an interdisciplinary perspective, he is also providing, through his public art, due visibility to individuals that deserve recognition for their great historical and current contributions in shaping our communities.”

A free public reception celebrating the opening of NOT Supposed 2-Be Here will take place on Saturday, Jan. 18 at the Newcomb Art Museum in the Woldenberg Art Center on Tulane’s uptown campus with a children’s art activity hour (inspired by the show) from 4 to 5 p.m. and music, drinks, catering, and artist’s remarks from 5 to 8 p.m. Additional information regarding exhibition events and programs can be found at newcombartmuseum.tulane.edu. This exhibition is supported in part by funds from the New Orleans Jazz and Heritage Foundation Community Partnership Grant.