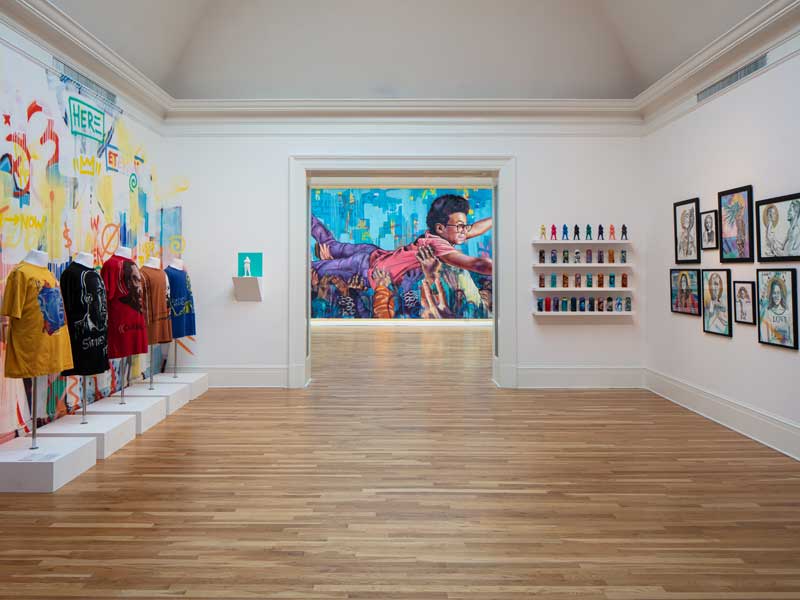 The Newcomb Art Museum will remain open to the public through Dec. 11, with a special "museum members only" day on Dec. 12. The museum will mark the close of Brandan "Bmike" Odums' exhibition with two final virtual programs, Egúngún Wá and The Music of Resistance. (Photo provided by Newcomb Art Museum)

With the close of the fall semester at Tulane, Newcomb Art Museum is pleased to reopen to the public for a limited time. The museum, which has been open solely to Tulane students, staff and faculty for the semester, reopened to the public this past Saturday and will remain open through Dec. 11 with a special museum members only day on Dec. 12, complete with tours and gift shop discounts.

Limited to 15 visitors at a time, guests can reserve their free tickets at the museum’s Eventbrite page to get their chance to explore the museum’s current exhibition NOT Supposed 2 BE Here – the first solo show in a museum setting for artist Brandan “Bmike” Odums – for the first time since March. (Questions regarding the opening and museum safety protocol may be directed to museum@tulane.edu).

“After having to be closed for so many months we are thrilled to be able to safely reopen our doors,” said Newcomb Art Museum’s Interim Director Miriam Taylor. “The work of Bmike Odums – whose art has the dual power to shine a light on an unseen past while providing boundless hope for a brighter, more just future – has never been more necessary and we are honored to be able to share it with the public again.”

In addition to opening their doors to the public, Newcomb Art Museum is marking the close of the exhibition with two final virtual programs. Egúngún Wá, which premieres Nov. 30 at noon on the museum’s Facebook and Vimeo channels is the latest in a series of videos inviting artists from different disciplines to use their mediums to reinterpret the artwork and themes presented in the current exhibition. On this occasion, native New Orleanian and multidisciplinary artist Ifátùmínínú Bamgbàlà Ar̀ẹsà presents Egúngún Wá which means “Come Ancestors” in Yorùbá.  The performance and altar installation are inspired by the stories and themes presented in Bmike’s work and is a call to the ancestors of Black, Indigenous, and people of color (BIPOC) New Orleanians, asking them to come and help fight for the city.

Premiering online on Dec. 2 at 6 p.m. CT, The Music of Resistance, the final virtual programming presented by the Newcomb Art Museum this semester, is a multidisciplinary conversation that honors the life and legacy of the late civil rights activist and community organizer, Llewelyn J. Soniat. Soniat served on the Executive Committee of the New Orleans branch of the NAACP and as an advisor to the NAACP Youth Council between 1958-1994. In these positions of leadership, he fought to desegregate Canal Street and combat the phenomenon of police brutality toward the African American community in New Orleans during the 1960s and beyond.

Llewelyn J. Soniat, whom Bmike Odums met while working as a cameraman at NOATV, is the subject of a 2020 portrait currently on display in NOT Supposed 2 BE Here. “Lleweyln Soniat was one of those elders who influenced me deeply,” said Odums. “NOATV was my real-life civics class at a time when I was searching for answers around my identity. This series of paintings pays tribute to those who helped me navigate that moment, as I listened behind the camera standing ten feet away.”

Versed in an array of disciplines, panelists will pay particular attention to the role of the archive as a tool of social justice. Guest speakers include ethnomusicologist Matt Sakakeeny, historian Raphael Cassimere Jr., longtime friend and fellow organizer who served as the president to the NAACP’s youth council after Soniat’s tenure, and Amistad Research Center Archivist Felicia Render. The Llewelyn Soniat papers are held by the Amistad Research Center located in Tilton Hall.

The Music of Resistance: A Tribute to Llewelyn J. Soniat panel discussion will premiere on Newcomb’s Facebook page on Dec. 2 at 6 p.m. CT, followed by a live Q&A with the panelists at 7:15 p.m. Registration for the Q&A Zoom is available via the link here. The Music of Resistance and Egúngún Wá are part of the Louisiana Reimages speaker series at the Newcomb Art Museum, which directly supports the work of local artists, scholars and culture bearers, and is funded in part under a grant from the Louisiana Endowment for the Humanities, the state affiliate of the National Endowment for the Humanities. (Any views, findings, conclusions or recommendations expressed in this program do not necessarily represent those of the National Endowment for the Humanities).