The Newcomb Dance Company of Tulane University returned recently from Hunter College in Manhattan, where the troupe performed as part of “Sharing the Legacy 2011: Nikolais Centennial” at the Sylvia and Danny Kaye Playhouse. 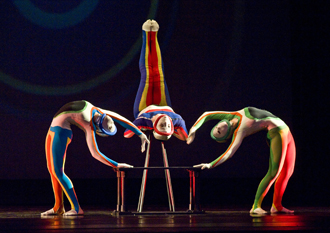 Bending over backwards for their art, members of the Newcomb Dance Company, Iman K. Marshall (from left), Natalie Gotter and Anna McKinnon, perform in “Temple,” choreographed in 1974 by Alwin Nikolais. (Photo by Paula Burch-Celentano)

At the performances on April 15â“16, the Newcomb company reprised “Temple,” a piece performed during February's “An Evening of Dance” concert on the Tulane campus. Nikolais' “Temple” is a 1974 work and celebrates the intricate exteriors and interiors of ancient and contemporary Asian houses of faith. Prior to the Tulane production, “Temple” was last performed in New York in 1982.

Iman K. Marshall, a junior at Tulane and second-year member of the Newcomb Dance Company, said, “I am honored that I was chosen to help recapture those moments that past Alwin Nikolais Company members once experienced. I am a part of the Alwin Nikolais legacy thanks to Alberto del Saz and the dance faculty at Tulane University.”

Del Saz, artistic director and repertory director of the Nikolais-Louis Foundation for Dance, set the majority works on the students. “Sharing the Legacy” offered public performances as well as panel discussions, master classes and improvisation workshops for the participating students and faculty.

“Sharing the Legacy” is presented every three years to help preserve modern dance masterpieces. Participating college students across the country learn the choreography and are invited to perform at the Kaye Playhouse.

The program was made possible with support from the National Endowment for the Arts as part of American Masterpieces: Three Centuries of Artistic Genius, in collaboration with a number of groups and individuals including the Tulane School of Liberal Arts, Elizabeth Delery Towe and Claire L. Whitehurst in memory of Newcomb professor emerita Minnette L. Starts, the Jill Karp Newcomb Dance Fund and the Newcomb College Institute Foundation.

Ashley Robison is business manager for the Tulane Department of Theatre and Dance.