Venerable Newcomb Hall has a new look inside. Its first-floor corridor walls have been saturated in red, and architectural details such relief columns, baseboards and trim stand out in creamy white. A new ceiling has been floated with a new lighting scheme. And there's new signage, including an electronic flat-screen bulletin board. 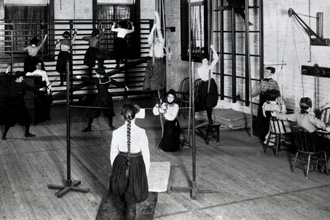 Among the historic photos displayed in Newcomb Hall is this image showing Clara Baer, third from right along the wall, instructing Newcomb students in the gymnasium on the Newcomb College Washington Avenue campus in the 1890s. Baer was a physical education pioneer.

The most distinctive element of the new design, however, is not high-tech. It's a nod to the past in the historic photos displayed on the walls in a gallery-like fashion.

Jeremy Jernegan, professor of art and associate dean of the School of Liberal Arts, oversaw the renovation and selected the photos from the Tulane University Archives and the Newcomb Archives.

Jernegan came on board as associate dean in summer 2008. He immediately set out to improve the ambiance of Newcomb Hall, creating a more welcoming atmosphere in a building that houses the School of Liberal Arts administrative offices and other academic departments, including the offices of dean Carole Haber. It is the “heart of the school,” says Jernegan.

Before the update, completed in spring, the hallway had a wretched appearance, says Jernegan. “It had the look of a 1950s state hospital.”

Jernegan worked with architect Wayne Troyer, who has been involved in other university projects, including the Lavin-Bernick Center. “He's terrific,” says Jernegan, adding that Troyer not only came up with great design ideas but also was helpful in stretching the project's small budget.

The update coincided with the installation of a new elevator in Newcomb Hall.

“There's a reason to be in the hall now in Newcomb Hall,” says Jernegan. “It's a more inviting place for faculty members to talk with colleagues and for students to mingle.”